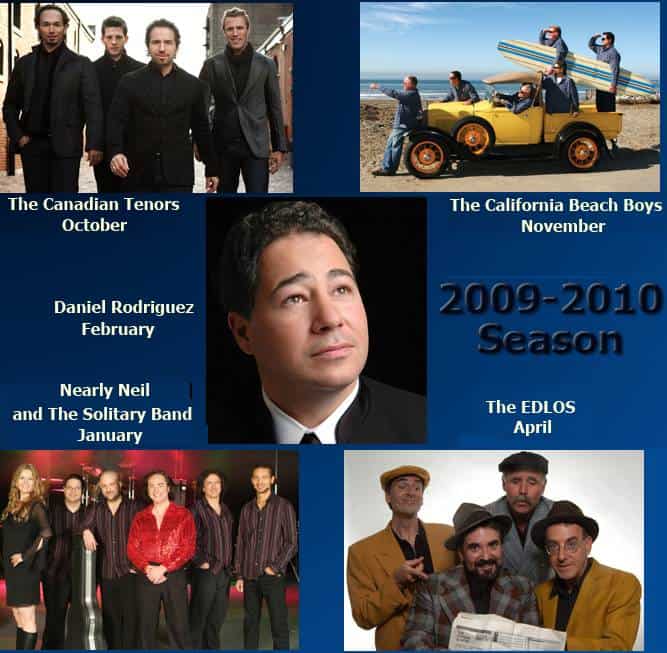 The Folsom Lake Community Concert Association is preparing for the 2009-2010 Concert Series and the subscrbers are excited! The previous season just ended, with Dale Gonyea, the acclaimed piano-comedian, Daniel Narducci, the Classic American Baritone, New Christy Minstrels from the 60s, and Pavlo’s Mediterranean style music.

Subscribers and Board members alike were thrilled with the performances and especially with meeting the performers after each concert.

Always striving to make each season better than the last, the Association has secured five top talents for the 2009-1010 season.

In October, The Canadian Tenors, four talented young men with incredibly powerful tenor voices and diverse vocal styles come to visit. They have undeniable charm and an eclectic blend of classical and contemporary pop. The Canadian Tenors, each with individual international acclaim, are said to be one of Canada’s most sought-after exports.

In November, The California Beach Boys, a Beach Boys Tribute Band, sing all the songs the original Beach Boys made famous, taking us right back to the 60’s. Remember all those great Beach Boys songs California Girls, Surfin USA, Catch a Wave, and many more.

Then, in January, Nearly Neil and The Solitary Band bring us an incomparable impersonation of Neil Diamond, an outstanding tribute to the singer we all know and love.

On a special day in February, Valentine’s Day, former New York City police officer, Daniel Rodriguez brings us his inspiring courage and faith. On September 11, 2001, when fate intervened in our lives, Daniel Rodriguez rendered a capella performances of “God Bless America” and the National Anthem that proved far greater than a patriotic gesture.

To wrap up the season, in April, The EDLOS, an “a cappella quartet supreme,” four classically trained singers explore a broad range of music and musical styles. We will remember them equally for their musicianship and for their infectiously funny and entertaining stage presence, heightened by their use of props, wigs, hats, and costume changes.

Acclaimed by subscribers as “the best entertainment value in town,” the Folsom Lake Community Concert Association is now accepting subscriptions for this season. The $20 discount for paying before May 15th makes it even better.

More information is available at the Folsom Lake Community Concert Association website. Steve and Doreen Mykytyn said “We are very excited about the new season, and so are our subscribers. Over 400 subscribers have already joined and taken advantage of the discount.”