Set in the high stakes world of the financial industry, Margin Call is a gripping tale about the obscene wealth of the morally bankrupt and, although not a tell-all, it tells enough to fascinate and makes no excuses for the contemptible behavior of the bad guys who took us down a road called Armageddon.

Eric (Stanley Tucci) is ‘let go’ by the Wall Street firm where he has worked for 17 years. As he collects his belongings, he hands a flash drive to an entry level analyst, Peter (Zachary Quinto). Peter downloads the drive and realizes that the investment company he works for is on the brink of disaster. He calls in the key executives and they make the decisions over the next 24 hours that instigate the start of the 2008 global meltdown. 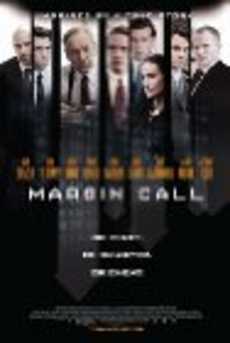 Obviously, not everyone understands the terminology of the financial world and, despite each of the bosses telling their minions to spell things out in simple terms, phrases like historical index don’t exactly roll off the tongue and it takes a long time before the issue of toxic mortgages is mentioned, which is something everyone would have understood immediately. It’s also baffling that 50 people from a staff of 80 are fired right at the beginning of the film, even before the financial meltdown begins, with no explanation being given for the culling.

In most films, no one ever takes the money, which is irritating because, as we all know, in real life, EVERYONE takes the money. But in this film it’s not the case, and when Eric is called back to help after getting fired, he initially says no, but when $1 million for a day’s work is placed on the table, he grabs it with both hands. Unfortunately, the filmmakers fall short of putting an exact price on everyone’s head, which is a shame, as painting all Wall Street traders as Judas Iscariots would have added a nice touch and made an excellent work of fiction into the most believable movie of the 21st century.