At the grand old age of 75, Joan Rivers is still working her butt off. She is still knocking them dead with her stand-up and still utterly convinced that she has never truly succeeded at anything. She is riddled with self-doubt and so sensitive that she actually feels hurt when she is heckled. Really? A stand-up comedienne with a layer of skin missing? Who’d have thought?

This documentary starts right at the beginning of River’s career, follows her stage debut, her first TV appearance, the play she wrote and the TV network who blackballed her. She tells us about her friends, her colleagues, her daughter and the husband who, it’s clear, she still feels let her down.

The Queen of Comedy’s insecurities play loud in this story. She never congratulates herself for what she has achieved and all that matters to her is what is not happening now. She dwells on the fact that she has been replaced by up-coming comediennes, and as she laments the loss of yet another booking she finds humor in her pain and embraces her disappointment in the reality of how it is, still finding kind words to say about her young usurpers. 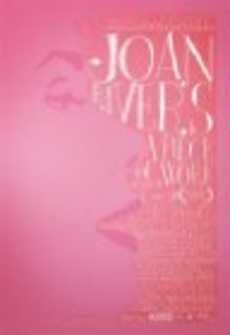 When Joan decides to enter Donald Trump’s Celebrity Apprentice it’s clear to everyone, except her, that she really is far too established, too smart and just too darn good for this kind of show. But Joan, truly, doesn’t think so. It’s interesting to note that Trump hides his insecurities behind endless self-praise and he would do well to take a lesson from Joan, who has humility running in her veins.

Joan’s spirit is generous, her heart is big and, although she may have had it all done, she will never have it all because, sadly, the gift of happiness eludes her. She’s much too preoccupied with tomorrow, too hard on herself for what she hasn’t achieved and most of the time seems like a fire engine rushing in the wrong direction. While lesser achievers may wake up and smell the roses, such serenity is always going to elude her as the only thing she wants to smell on waking is the print of the newspaper that’s reviewed her latest show.