Harry Brown is a 76 year old man who loses his wife through illness and his only friend through tragedy. His daughter died when she was 13, his health is ailing and he lives in a crime-infested neighborhood with absolutely no one by his side.

Simply put, Harry is bereft of anything he values and as brave is just another word for ‘nothing to lose’, he decides to pin that particular badge on his chest and get to work. He’s commanding and convincing and watching him in Dirty Harry mode when wheezing from emphysema is quite an experience. You really shouldn’t miss a minute.

Harry lives in an apartment on a sprawling housing estate and there are two ways to reach the rest of the world. One is a tunnel, the other is the long way around. The tunnel is occupied by gangs and Harry, like all the other residents, always takes the alternate route.

Even when he is rushing to his dying wife’s bedside and hesitates by the subway entrance, he still dares not enter. This story appears to be about vigilantes and revenge and taking the law into your own hands, and that’s what we see, but really it’s about fear and what we do when we become helpless because we have been made to feel so very, very afraid. 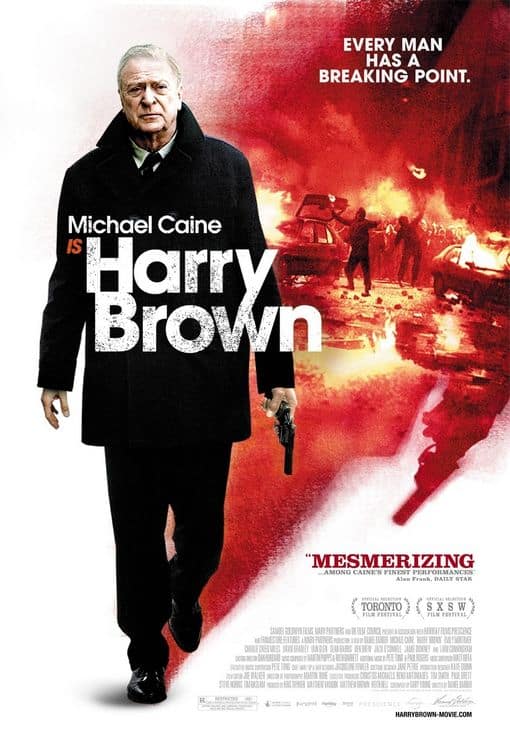 We meet the tyrants, and we meet the victims, and then we see revenge administered quite mercilessly, which begs the question – shouldn’t there be another side to this story? Well, yes, there should, but it’s not being told here perhaps because the filmmakers believe the time for excuses is long gone and by refusing to give the bad guys any kind of voice we are left conscience-free to take Harry Brown’s side and to enjoy that ‘so there’ feeling to its most enjoyable extent.

If the filmmakers say it’s OK, then it must be! And moving even further down this fun-packed slippery slope, is the vigilante approach such a bad idea? If all aging, brave people were to band together, arm themselves to the teeth and make their neighborhoods safe, the worst thing that could happen is they get caught. As they’re all ill, they could get sick notes from their doctors and their trial would be postponed until they’re better. And how long would, that be? Long enough, methinks.

There are a few things that aren’t quite clear, such as how Harry knows where to find the local ‘gunsmith’, his behavior when he gets there and why the riots start, but these are fleeting thoughts and with every moment steeped in such a granular, burrowing tone the mood is never lost and the troubled side of British society is drawn with great authenticity.

As a Brit, I can vouch for that. The only thing I disagree with is the genre. It is tagged as a crime/drama/western but it’s really a crime/drama/horror – when ex-marines get going they don’t mess about and the havoc that Harry wreaks is really something. And it most definitely isn’t a western. In the Wild West everyone was armed, but in the UK, it’s only the kids.