If the trans-human future predicted by visionary Ray Kurzweil in his best seller The Age of Spiritual Machines is at all accurate, then it is only a matter of time before a disturbing dystopia such as the one in Gamer might come to pass. Set in 2034, the chilling, sci-fi scenario established at the outset is dominated by Ken Castle (Michael C. Hall), a diabolical billionaire with mind-control technology at his disposal.

The world has been divided into the “haves” and the “have-nots,” with the members of the former group paying Castle for the privilege of controlling the behavior of the latter group in one of two high-tech, virtual reality video games. The first is called Society, a perverse variation of Sim City where players get to direct human beings with computer chips implanted in their brains living in a simulated, social-networking community. Given the voyeuristic nature of the kinky creeps with the joysticks in their hands, it is no surprise that the less fortunate participants often find themselves forced to mate with complete strangers or to engage in bizarre sex acts against their will. 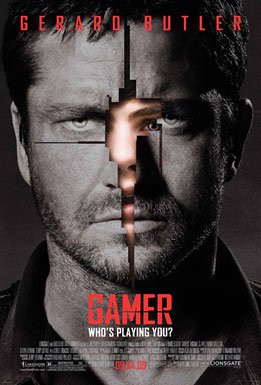 The other interactive game is called Slayers and features condemned convicted murderers promised their liberty if they manage to survive a series of 30 death matches in a row. Here, we are introduced to the picture’s protagonist, Kable (Gerard Butler), a popular contestant who has captured the imagination of millions of viewers by prevailing in mortal combat 27 times thus far.

He owes a debt of gratitude to 17 year-old Simon (Logan Lerman), the spoiled-rotten preppie controlling his every move from an easy chair. Still, despite being so close to victory, the wrongly-convicted Kable is fixated on wrested back control of his own mind in order to vindicate his name, settle a score with Castle and ultimately reunite with his wife Angie (Amber Valletta) and their young daughter Delia (Brighid Fleming). Of course, this proves easier said than done, especially since his gorgeous spouse is currently a sex slave stuck in Society’s parallel universe where she’s been programmed to fuel the depraved fantasies of the rubbery eunuch (Ramsey Moore) who purchased her services.

Fortunately, a futuristic cavalry arrives in an underground resistance movement led by Humanz Brother (Ludacris), a hacker with street cred who attempts to shake folks out of their complacency with tough love like “You’re just another poor, little rich honky… Do you feel me?” Such cornball dialogue aside, Gamer is nonetheless, worthwhile between its intriguing, thought-provoking premise and the array of eye-popping special effects on display during its hyperbolic fight sequences.

A cautionary tale issuing a dire warning about the prospects for humanity in a world where machines lead and people follow.

To order a copy of Gamer on DVD, visit: AMAZON