A whimsically crafted tale of a maturity-stunted 35 year old husband and father who runs away from home with his suitcase of childhood toys in tow, Full Grown Men manages to be silly, surreal and wise beyond years all at once. This combo memory lane, reverse time travel road movie and thirtysomething boy bonding satire is flaky storytelling in the extreme, and yet as familiar and weirdly nostalgic as the spark of recognition of a personal vintage item suddenly discovered stuffed way back in a closet.

Alby Cutrera (Matt McGrath) is the early midlife crisis gent in question, a Latino South Florida family man whose wife is fed up with his slacker lifestyle, preoccupation with his old preteen action figure toys, comic strip doodling, and buddy bonding with their young son. So Alby packs up his toys in a huff, and leaves home to hitch rides in search of his over-idealized kid past and a return to the Diggityland amusement park up the coast – likely the film’s Disney version of Never Never Land.

Along the way, Alby encounters some rude awakening reality checks, including disadvantaged folks who don’t have the option he does of ever being or staying grown up, or else are more frighteningly regressed than he is. Like mentally disabled kids being schooled by a special ed teacher childhood pal he used to taunt back then (Judah Friedlander) and whose shrink made him promise to “cut back on deja vu’s”; his invalid mom who seems to be stricken with Alzheimers; sexual stalker seniors and their overgrown babe magnet pool guy at a Fountain Of Youth Retirement Village; and a survivalist psycho hitchhiker in fatigues (Alan Cumming) stuck in his own private childhood fantasy that he’s Action Jackson with a terrorist dark side. 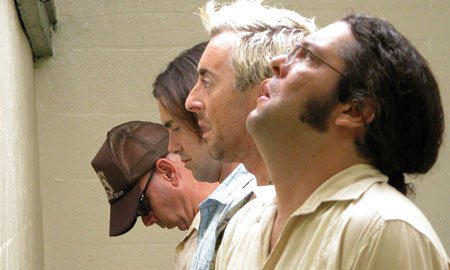 When Alby gets wind of these and other adult assorted nuts imprisoned in the past, they act like a tough love mirror to both scare him and snap him back into reality and the positives of residing in the present tense. But not before some zany Candide-style adventures along the way, like encountering a kooky barmaid (Amy Sedaris) studying for a clown degree, who sets a pack of midget bouncers on Alby to stomp on him in the back alley when he can’t pay up the bar tab; a mentally challenged kid who teaches him how to brush his teeth properly; and a seasoned trailer park seductress (Deborah Harry) in a blue corset who’s convinced she’s a mermaid, and who cooks Alby breakfast and makes a pass after he falls asleep in her garden.

Always amusingly fanciful and wise, and without ever being preachy, the enchanting yet sobering Full Grown Men touches on the all too common urge and associated fantasies to make a return trip to premature second childhood, but with the cautionary proviso to maybe visit but not desire to live there. And in any case, certainly not before you’ve not quite parted ways with the original, the first time around.