Mike Myers Serves Up Sophomoric Mess as “The Love Guru”

Those familiar with Mike Myers’ work know that he’s a comedic genius quite capable of keeping you in hysterics whether cavorting across the screen as Austin Powers, Shrek, Dr. Evil, Fat Bastard, Goldmember, Wayne Campbell or any of the other unforgettable character he’s portrayed. That impressive track record makes his latest offering all the more disappointing, for The Love Guru barely registers a blip on the audience laff-o-meter over the course of its patience-testing, 90-minute duration.

In 25 words or less, the story revolves around Maurice Pitka (Myers), an American-born orphan raised in an ashram who returns to the States from India hoping to replace Deepak Chopra as America’s #1 self help guru and thereby earn an invite to appear on Oprah. While on this quest, Pitka happens to be hired by the owner (Jessica Alba) of the Toronto Maple Leafs to help her star player (Romany Malco) win back his wife (Meagan Good) from the better-endowed goalie (Justin Timberlake) of her team’s arch rivals in time to win the Stanley Cup.

Every bit as scattered as that synopsis reads, this overambitious picture endeavors to bridge a dizzying number of cinematic genres only to end up doing none of them justice in at desperate attempt to be all things to all demographics. Sloppily combining elements of the pop culture parody, the overcoming-the-odds sports saga, the Bollywood musical, the love triangle melodrama, the loss of innocence tale, the social satire, the gross-out teensploit and the shameless product placement-laden production, The Love Guru looks like someone lazily decided to throw a bunch of bull substance at the screen to see what sticks. Nothing does, trust me. 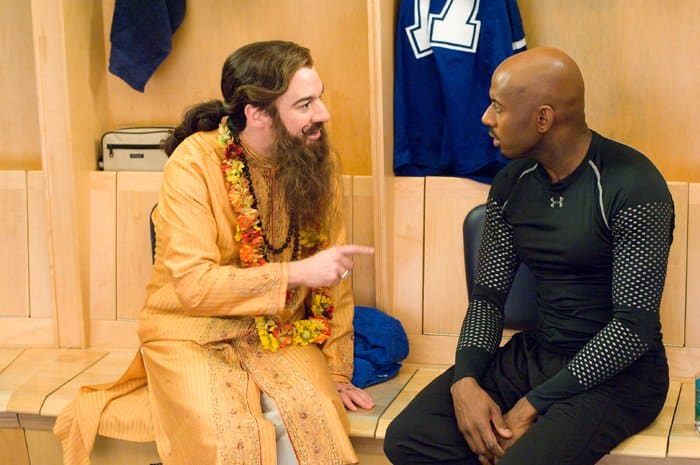 The bulk of what’s passed off as humor here are double entendres about male genitalia, starting with the names of characters like Tugginmypudha (Ben Kingsley), Jacques Le Coq (Timberlake), Dick Pants (John Oliver) and Satchabignoba (Omid Djialili). Leaving even less to the imagination are the titles of Guru’s Pitka best-selling books, such as BLOW ME (a mnemonic for Be Loving & Openhearted With My Emotions).

One scene featured a scrotum-looking delicacy called “Nuts in a Sling,” an East Indian dish served astride a big pickle to make sure you get it. And groan-inducing lines like “Would you like your nuts crushed?” “Help Uncle Jack off an elephant” and “Did you know a Dickie Withers at 85?” are all right out of a junior high school locker room.

When not making a play on penis words, the slapstick turns sophomoric, as in the gross game where the participants try to swat each other in the mouth with urine soaked mops. Guess who gets a handle shoved right up his rectum? 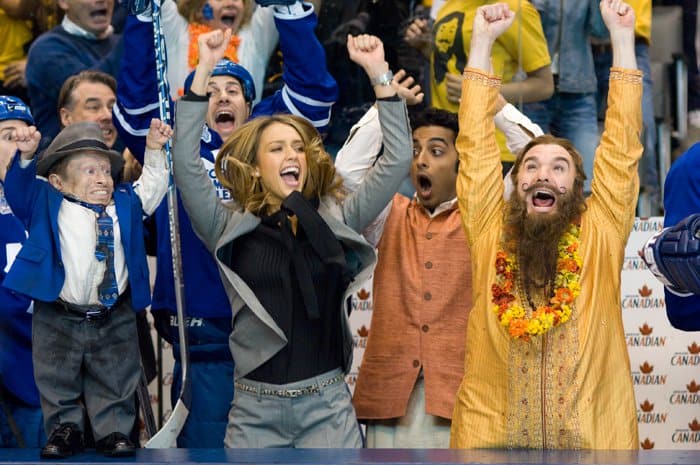 Otherwise, The Love Guru is generally obsessed with bodily functions, ranging from farts to feces to ejaculation. Perhaps what’s most disturbing is that scriptwriter Myers must be out of ideas, given his borrowing stale ideas from mediocre movies. We could’ve been spared the shots up the skirts of Britney Spears, Paris Hilton and Lindsay Lohan san panties, the same three celebutantes similarly showcased in Meet the Spartans.

Don’t be suckered by all the celebrities in the cast, including Jessica Simpson, Kanye West, Verne “Mini-Me” Troyer, Stephen Colbert, Val Kilmer, Telma Hopkins, Deepak Chopra and Mariska Hargitay. It’s Mike Myers job to make you laugh, and he fails miserably in what might not be the best performance of his career, but it’s certainly his worst. 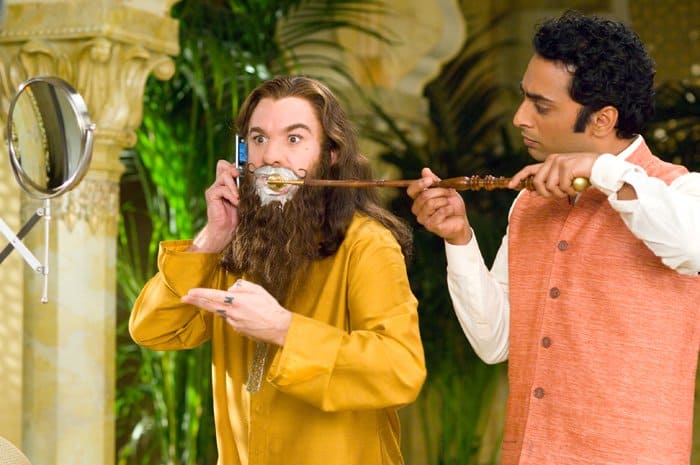