Two groups in American society that more often than not endure life as nearly invisible emotional wallpaper in movies, are women and nonwhites. But Courtney Hunt’s Frozen River, a radiant gem of regional filmmaking, places these characters front and center in both mutual and conflicting struggles alike, touching on poverty, single motherhood, female empowerment and collective sisterhood crossing racial and cultural lines.

Playing out against the harsh and punishing backdrop of a brutal winter in Upstate Massena NY, near the Quebec border around Christmastime, Frozen River probes the grueling circumstances surrounding the lives of three impoverished mothers in crisis. Ray (Melissa Leo) toils at a minimum wage job at the local Yankee Dollar store to support her two sons. But she’s in danger of losing a new home along with other items about to be repossessed, ever since her gambler husband recently abandoned the family and left with what little money they had. 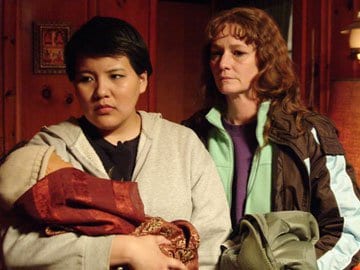 When Ray spots his car being driven around by Lila (Misty Upham), a young woman from the neighboring Mohawk Reservation, an ugly confrontation ensues. The two eventually declare an uneasy truce, rife with racism and mutual suspicion, when Lila convinces Ray that they can both make substantial cash by driving the car across the frozen but exceedingly dangerous St. Lawrence River along the Canadian border, and smuggling undocumented humans into the US. Apparently the more promising route through Indian territory is off limits to the authorities of either country.

Ray at first balks, then reluctantly agrees as her financial woes loom. Lila is consumed by very different anxieties. She’s also been abandoned by her husband, and her mother-in-law has taken her newborn baby away from her, likely expecting to prevail legally since Lila has no visible – or at least legal – means of support. And Lila hopes to raise money to provide for her child.

The repeated covert missions by car across the precarious, cracking icy waters, create ever mounting tense, eerie drama, as the two women smuggle terrified Asians squeezed into the trunk, humans who are bound for lifelong servitude as repayment for their journey, to callous extortionists. There’s also another kind of chilling progression, evident in Ray’s psychological transformation from anxious, caring mom to a woman increasingly obsessed by materialism and greed, and who seems to have abandoned her humanity along the way. It’s only after she unknowingly tosses the bundled baby of a Pakistani mom in transit out on the lake, insisting that the family luggage most likely contains terrorist bombs, that Ray begins to face her corrupted life values.

The stunning emotional dynamic between Law & Order’s Melissa Leo and Montana-born Misty Upham of the Blackfeet Tribe, is never less than mesmerizing, as each woman loses her sense of belonging to the world, then slowly struggles to find her bearings again, through another troubled kindred female soul. Director Courtney Hunt has achieved a remarkable work with Frozen River, that is both a poignant and exquisitely life-affirming sisterhood rite of passage, and a rare glimpse into the overwhelmed but enduring spirit of the Mohawk Nation.