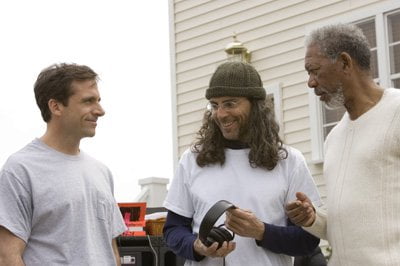 Steve Carrell’s breakout role came in Bruce Almighty (2003) where, as TV news anchorman Evan Baxter, he managed to upstage the film’s star, Jim Carrey, in every scene they shared. In fact, he was so memorable in what really amounted to not much more than a cameo that he has since enjoyed a meteoric rise. Meanwhile Carrey’s career has been in a bit of a tailspin, being marked by four increasingly mediocre movies: Eternal Sunshine of the Spotless Mind, Lemony Snicket, Fun with Dick and Jane, and The Number 23.

Carrell, by contrast, followed up with numerous hit flicks, including Little Miss Sunshine, The 40 Year-Old Virgin, Over the Hedge, Anchorman, and Bewitched. On top of that, he’s won a Golden Globe for his work on The Office, the NBC sitcom which won the Emmy in 2006 as the year’s Outstanding Comedy Series.

So, since Steve, at this point, is much more of a draw than Carrey, it’s no surprise that the sequel to Bruce Almighty would be called Evan Almighty instead of Bruce Almighty 2. In fact, the movie doesn’t even bother to mention Bruce or to explain his conspicuous absence. 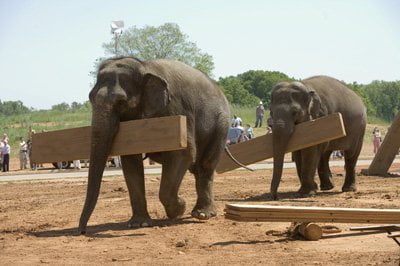 Soon after the opening credits roll, a tearful Evan bids farewell to Buffalo, before leaving town accompanied by his wife Joan (Lauren Graham), and their sons, Dylan (Johnny Simmons), Jordan (Graham Phillips) and Ryan (Jimmy Bennett). He’s headed to Washington, D.C. where he’s about to be sworn in to represent his beloved hometown as its newly-elected Congressman.

Upon their arrival, the family is welcomed by Eve Adams (Molly Shannon), the syrupy sweet realtor who sold them their just-completed McMansion, sight unseen, located in an exclusive gated community called Prestige Crest. Unbeknownst to the Baxters, the development is a hazardous natural disaster waiting to happen. In fact, it was only been built because of a crooked land deal bartered by Congressman Long (John Goodman), the same corrupt politician who is now pressuring Evan to co-sponsor another bill that would further destabilize the eco-system.

Fortunately, God intervenes in the person of a frequently shape-shifting Morgan Freeman. This time, rather than surrender his powers temporarily (as he did to Bruce in the original), he uses them himself to implore Evan to build an ark.

At every turn, Evan sees “Genesis 6:14” (a reference to a scripture which reads “Make thee an ark of gopherwood”), on his license plate, on his alarm clock, etcetera. This inspires him to take heed of God’s plan for him.

Still, the freshman Congressman initially ignores this divine calling in favor of keeping his campaign promise to “change the world” at the Capitol. There, his colorful staff includes a latent intern (Jonah Hill) and a wisecracking executive assistant (Wanda Sykes) who shoots off a steady stream of non-sequiturs such as “Do you smell anthrax?” and “Are you on that Phen-Phen?” 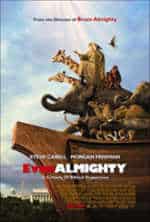 Unfortunately, the sassy sister’s clever asides can’t save this special-effects-driven flick which is more about infantile animal jokes, especially of the “poop landing on head” and “swift kick to the crotch” variety. Luckily for the producers, the picture is laced with prominent ad placements for everything from C-SPAN to Quaker cereal to Century 21 to Home Depot to Hummer to Barbasol shaving cream to Dell computers to NBC to Coca-Cola to the U.S. Postal Service, otherwise I don’t know how the film could possibly recoup the close to $200 million reportedly spent making the movie.

Eventually, like a modern-day Noah, Evan does grow a beard, don a robe, and set aside worldly concerns to build a mammoth boat as commanded. And, of course, two animals of every species soon start showing up in anticipation of the great flood which, when it arrives, vindicates our devout protagonist in the eyes of his neighbors, his colleagues, the media, anda host of other Doubting Thomases.

A faith-based, corporate-sponsored, family comedy for folks who don’t mind having a familiar Biblical tale about sin overhauled into a contemporary allegory about saving the environment.

Rated PG for crude humor and scenes of peril.