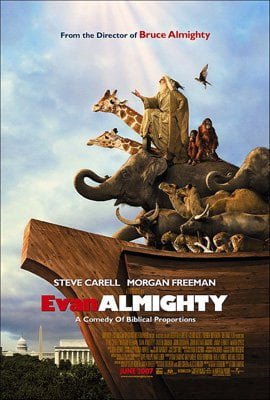 Born on June 1, 1937 in Memphis, Tennessee, Morgan Freeman is keeping extraordinarily busy for an academy Award-winner who has recently turned 70. The peripatetic septuagenarian has numerous upcoming films on the docket, including the three being released later this year, The Feast of Love, The Last Full Measure, and Gone, Baby, Gone, a murder mystery which will mark Ben Affleck’s directorial debut.

In 2008, he’ll be co-starring with Jack Nicholson in The Bucket List, a Rob Reiner road comedy about a couple of terminally-ill patients who make a break from the cancer ward. In Wanted, he’ll play an assassin in an action adventure along with Angelina Jolie and Common. 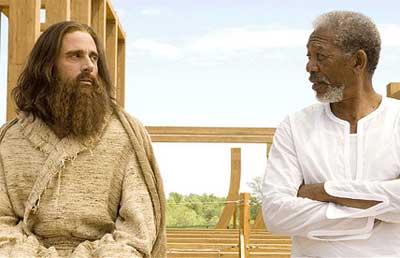 Here, he talks a bit about his current flick, Evan Almighty, where he’s reprising his role as God.

KW: Did you have any second thoughts about agreeing to play God?

MF: I got the feeling a long time ago, that eventually someone was going to come up to me and say, “We want you to play this role.” I wondered, “What am I going to do?” If it was a straight role, I wouldn’t do it, pure and simple.

KW: Do you enjoy working with Tom Shadyac as a director.

KW: How would you describe his directorial style?

MF: I’m not that keen on being directed. If you give me a part, I gotta assume that you think I’ll do it, rather than be a conduit. However, Tom has a way of infusing his direction with… he’s like, “Try it for me.” It’s like, “Okay, I’m going to do you a favor.” Also, generally, he’s on. He knows exactly what he sees and what he wants, which is very helpful. Playing this role, I might have a tendency to get too serious. So, one of his constant reminders to me was. “Just keep it light,” which was really right.

KW: What’s the significance of god’s inspiring random acts of kindness in this picture?

MF: The idea is that a random act of kindness will lead to another and another and an exponential spreading. It’s like, I will do something good for you, and because of that, your belief in human generosity and interaction grows. So, you may not do anything for me… you may never even see me again, but you’ll be more than willing to perform an act of kindness for someone else, if you see a need. And that just keeps moving.

KW: How was it co-starring opposite Steve Carell?

MF: He’s a professional. By professional, I mean not only is he good at his craft, but he’s dedicated to it. And he himself is a terrific human being. I find that’s very prevalent in this business. Most of the people I worked with, 99.999% of them are just that… terrific people… lovely to work with.

KW: You seem as enthusiastic as ever about acting.

MF: I always have a great time working. I so enjoy doing it. People say, “You’re going to work.” And I think, “No, the work is in looking for work.” After you get it, you’re just going to play. So, these are situations where I’m just having a great time, and hoping that everybody around me is having just as wonderful a time.