A strangely fitting romantic comedy for at least two occasions on tap right now – Valentines Day and primary season – Definitely, Maybe is likewise a tale of two bittersweet sex-related predicaments endured by Ryan Reynolds’ hapless protagonist, Will Hayes. That is, at least three women who both enchanted Will and broke his heart during his hard knocks, early adult years, in addition to, well, Bill Clinton.

No stranger to simultaneously messy and goofy love entanglements on screen, writer/director Adam Brooks (Bridget Jones: The Edge Of Reason, Wimbledon) does inventive, surprisingly creative renovations on the predictable, been-there-done-that conventions of romantic comedy with Definitely, Maybe. Hayes, in keeping with the film’s title, has spent his life wracked with indecision when it comes to sorting out the numerous women and disappointing relationships over the years. Equally demoralizing for Hayes, are the sex scandals and impeachment proceedings against Bill Clinton back in the day, a presidential candidate for whom he campaigned passionately in New York as a naive suburban kid fresh from college.

Carrying the weight of all this complicated baggage into thirtysomething angst, Hayes is now facing an imminent divorce action from he-won’t-say-whom. Or at least, not just yet. Because this film within a film is framed quite whimsically and delightfully as a guessing game, fraught with all sorts of teasers and playful clues, as a bedtime story concocted for his far too nosy and precocious young daughter, Maya (Abigail Breslin). 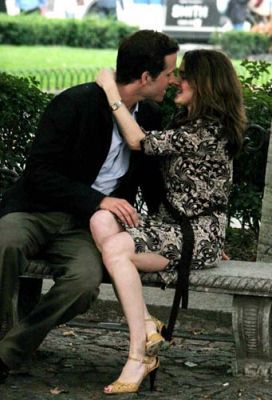 The gist of this sleepy time whodunit for Maya – who is herself in the throes of emotional distress at the moment as the child of a broken home – is to guess which mystery woman fleshed out in elaborate romantic detail by dad, became her actual mother in the end. The three memorable babes include girl-next-door college sweetheart Emily (Elizabeth Banks), Summer (Rachel Weisz) who’s equally preoccupied as a groupie sex slave to a prominent drunken writer (Kevin Kline), and April (Isla Fisher), a ditzy clerk he met back at Clinton’s campaign headquarters, who can’t even figure out whether she may or may not have a secret lifelong crush on Hayes, talk about ‘maybe.’

Not exactly Arabian Nights, but with its own unique and seductive charms – not to mention a side order of political sleaze – Definitely Maybe, with only an occasional narrative slump precipitated by its excessive repeat time travel routine, gets that once-upon-a-time-groove going with feeling and style. And with all those compulsory nuclear family values films stacking up at the box office lately, it’s nice to see for a change an affectionate and affirmative tale spun for all those kids of broken families out there, right around Valentines Day.