This children’s film has been created in live action, puppetry and computer animation and is set in two worlds – one has talking cats and dogs, the other has regular humans. Creating two planets in a film can work magnificently if that’s what the story is about, but if it’s only the backdrop, it gets a little tricky. Probably a little like trying to mix oil and water, or deciding to buy magnetic catches; you know, deep down, it’s just not going to work.

Diggs is a smart police dog, always eager to please, but this enthusiasm causes more problems than it solves and he is relegated to a life in the kennels, with little hope of ever getting out. Kitty Galore, a Siamese spy turned-rogue, has created a meow that, when heard by dogs, turns them into killers. Kitty plans to transmit her evil meow around the world so that dogs everywhere will attack and, ultimately, be put down. The Dog Spies discover her plan and enlist the renegade Diggs to help them in their battle to save the canine world from extinction. 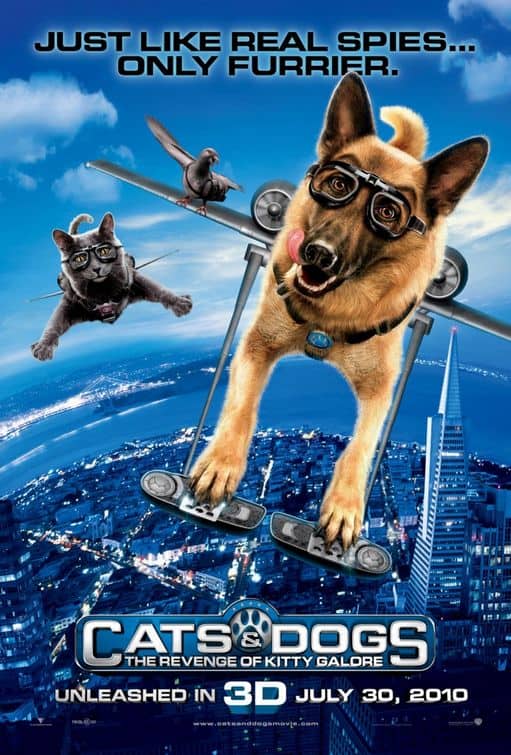 This is a very strong concept and the visuals are spectacular, but there is very little comedy and it does not have the universal appeal a film of this genre could.

Far too much time is spent on storylines about the owners of Diggs and Kitty, which don’t relate to the concept and only serve to slow down the action and break the tension the canine/feline battle tries so hard to create.

There are also lots of ‘borrowings’ in this film which don’t give a nod to irony or anything else and just seem to be fillers-in. Apart from Kitty Galore, there’s music from James Bond and Rocky, K-9 from you-know-Who and Hector Hannibal makes an appearance as a white Persian cat. The latter is a particularly strange choice as this is a children’s film, none of whom will have seen Silence of the Lambs.

Hannibal appears again in the teaser at the end, setting the scene for a sequel, which seems to be the latest fad in film endings and gives me a sinking feeling that the mandate of storytelling has been rewritten in the quest for the next franchise.

The final moments of a film should be the most satisfying, when the final dot is added to characters and redemption becomes master. Snatching away these moments and turning them into a sales pitch simply exposes the cheap hope of the filmmaker and is not the way to breed audience loyalty.

But this is a kids’ film and does any of this really matter? If it was on DVD, no, because the parents don’t have to sit through it, but in the movies, you bet it does. Someone’s got to drive the taxi. And is turning their favorite serial killer into a furry white pooch such a good idea? No, not really. It’s a bit like serving him up a plate of liver without a nice, iced glass of Chianti. You just wouldn’t do it, would you?