If you’re wondering just how bad a bad lieutenant can be, let’s just say that Nicolas Cage’s 21st century new and not morally improved re-incarnation of Abel Ferrara’s original 1992 cult version, to say the least, renders Harvey Keitel’s bad apple psycho cop a saint in comparison. And while Ferrara’s take on law enforcement depravity was at least susceptible to screen shock value and religious redemption of sorts back then, Werner Herzog’s infinitely darker view of human nature today is so over the top and beyond cynicism, that it’s strangely closer to inappropriately laugh-out-loud Tarantino pranksterism.

Sporting a sleazy chip on his shoulder, McDonough is more often than not ripping off when not raping whomever he happens to be collaring at the moment, while less than impressing with his own self-styled tag line by way of introduction to assorted incidental perps, ‘I’m the last person in the world you want me to be.’ A variety of all in a day’s work activity for McDonough may include second thoughts about letting an inmate drown in his designer Swiss underwear in perhaps the New Orleans local precinct version of waterboarding; smoking joints with detainees because nobody would ever believe he actually did even if civilian complaints are filed; and stalking young clubbing party animals to relieve them of their money and drugs, while demanding public sex with their dates, in exchange for not arresting them. 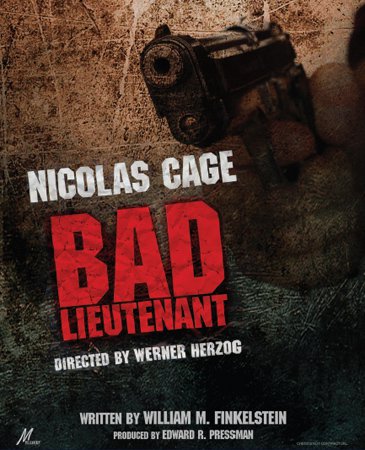 And as the excessively inebriated detective indiscriminately swallows whatever controlled and uncontrolled substances alike come his way, crazed hallucinations eventually kick in. But since we’re talking a more tropical setting as opposed to the 1992 Bad Lieutenant New York City original, instead of pink elephants McDonough freaks out on green iguanas imagined everywhere, even at the site of traffic accidents.

In casual disregard of retaining the sanctity of the first film’s plot points, or even bothering at all with the fact that southern characters should in the least have southern accents, Herzog likewise dispenses with any pretense of restraint in shackling the lunatic behavior of his main character, that ranges from scary to just plain silly. But Bad Lieutenant is ultimately redeemed – the movie if not the character – by Cage’s manically appealing portrayal of a cop who loses his cool and acts like an unbelievable lunatic, on a regular basis.