Documentaries generally inform, shine a light or launch a crusade. Always in Season does the first two with aplomb so hopefully a march for justice will follow.

Lennon Lacy was 17 years old when he was found hanging from a swing set in rural North Carolina. He was an excellent student and surrounded by a loving family. He had never abused drugs nor suffered from depression. The only thing he had to worry about was his performance at a ball game the next day, for which he’d already packed a bag. 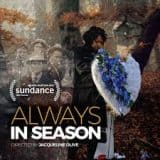 But what Lennon did have, according to the pathologist who performed the autopsy, were a lot of fresh bruises on his forearms. In the hours before he died, he had tried to fend off an attacker. But in spite of this and an abundance of other evidence, Lennon’s death was ruled a suicide. This promising millennial was of African American descent.

In juxtaposition, another unsolved crime unfolds. In 1946, two couples in Monroe, Georgia, were dragged from their car and shot to death.

A group of residents, including the daughter of a Ku Klux Clan leader, annually reenact this mass shooting. They’re all enraged that no one was ever held responsible for these murders and believe the perpetrators are still living amongst them. Obviously, the scenes are straight out of a horror movie and it’s troubling that, amongst the audience watching on the side-lines, there are children.

Claudia Lacy talks through her pain about her quest to find justice for her lost child. But it’s Lennon’s brother, Pierre, who makes us all think. He’s clearly pining for the little brother he adored but remains composed and articulate in the face of blood-boiling effronteries. He’s also a prime example of how to make a point.

Lennon died on a Friday, but his family were unable to get any information from the police until the following Tuesday. It was Labor Day weekend so the police station was closed for three straight days. Pierre’s voice is controlled and no accusation is made but the indignation in his eyes is haunting. Did the police really do what he said to a grieving mother? Apparently, yes, they did.

Jacqueline Olive, the filmmaker, tells her tale by gently lobbing balls onto the court, and letting them land where they may. But now and again, what looks like a ball is, in fact, a hand grenade. It lands quietly enough, but then the impact blows off the veneer that’s trying to keep this miscarriage of justice in a dark, forgotten corner. One of those truth bombs lands 30 minutes before the end. It’s an Aha! moment but not something deserving of applause.