This film is a daring combination of tragedy and comedy which works for a while but then runs out of steam, becomes sentimental and, without the depth of a tear jerker, ends up in no man’s land. But when it’s good, it’s good, and anything that is this dark and actually funny deserves a place in the annals of movie history.

Adam (Joseph Gordon-Levitt) works for a local radio station and is in love with his girlfriend Rachael (Bryce Dallas Howard) who his best friend Kyle (Seth Rogan) despises. Adam’s life is turned upside down when he is diagnosed with cancer and he has to undergo grueling chemotherapy while dealing with his overbearing friend, reluctant girlfriend, hysterical mother (Angelica Houston) and inexperienced therapist (Anna Kendrick). 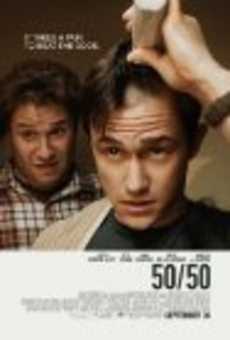 Adam is overshadowed in every scene by the rumbustious Kyle, and when Kyle is not there, neither are the laughs. Had the storyline about Kyle’s dislike of Adam’s girlfriend been given more latitude, the interaction could have centered on the triangle, with both Kyle and Rachael putting more energy into competing with each other than taking care of Adam’s needs. This film is, amongst other things, a buddy comedy and adding more buddy time would have kept the tone more constant.

The great comedic moments in this film are so irreverent it’s amazing they ever got to the screen. When Kyle is confronted with Adam’s tragic news, his way of dealing with it is to start reciting the names of celebrities who have beaten cancer, including the guy who “gets it all the time.” But just as Adam is starting to feel a little better, Kyle adds Patrick Swayze to the list, and the subsequent conversation between the two friends could not get any darker or more flippant. This also plays with the audience’s emotions, who feel guilty for finding humor at the expense of this actor’s tragic death, which is writing at its most clever.

This film is written by Will Reiser, who was diagnosed with cancer at the age of 24 and whose best friend is Seth Rogan. Obviously these two young men used comedy as a coping mechanism for their sheer terror and then decided to share it with the whole world, which may help some fellow sufferers and horrify others, but the glorious part of the real and screen stories is that there is a triumphant, heartwarming and truly happy ending for everyone.

Will – thanks for sharing.