Roland Emmerich’s name is closely associated with overblown apocalyptic adventures like Independence Day (1996) and The Day after Tomorrow (2004). Regrettably, the German-born director’s latest, 2012, fails to measure up to his earlier offerings, despite its being filled with his trademark bombastic special effects coming courtesy of a quarter-billion dollar budget.

Stripped of its pretense, the picture is basically a stock disaster flick which relies on trite dialogue while recycling a host of the genre’s groan-inducing cliches. On top of that, the production features frame after frame of blatant prominent ad placements, shamelessly hawking everything from Fruit Loops to Jack Daniels to Rice Krispies to Sony to Pabst Blue Ribbon Beer to Marriott Hotels to Virgin Atlantic Airways to Bentley to Caesar’s Palace to Sugar Frosted Flakes to Kellogg’s All Bran. 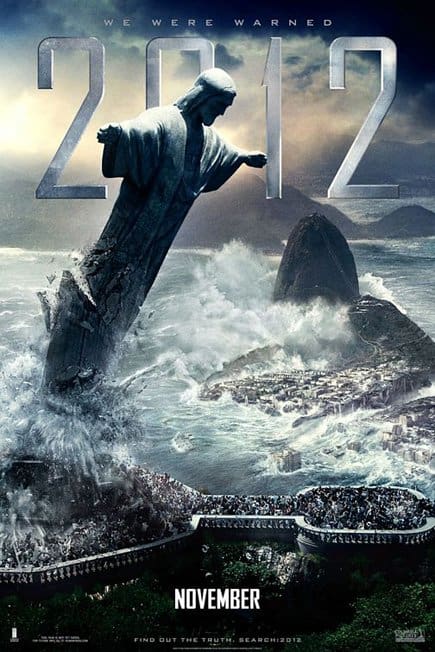 Still, those crass commercials are a minor annoyance compared to the preposterous plot designed to hold the attention of grade school children. The story was ostensibly inspired by a mythical Mayan prophesy predicting that the world will end during the winter solstice of 2012, which falls on December 21st. Why someone would put any stock in the pseudo-scientific claims of an ancient civilization is beyond the ken of this critic.

In any case, at the point of departure in 2009, we’re introduced to Jackson Curtiss (John Cusack) the underappreciated author of “Farewell Atlantic,” a book which ostensibly forecast the global crisis. By no means is Jackson the only person aware of the impending catastrophe.

There’s Charlie Frost (Woody Harrelson), a burnt-out hippie issuing dire warnings over the airwaves from a makeshift radio station inside an RV parked atop a mountain in Yellowstone National Park. Although his broadcasts are being dismissed as the unsubstantiated rant of the lunatic fringe, there are plenty of scientists and politicians secretly taking the problem seriously.

For instance, Dr. Adrian Helmsley (Chiwetel Ejiofor) ventures 11,000 feet below sea level down an abandoned copper mine only to discover that “the Earth’s crust is destabilizing.” Soon after he urgently reports back to President Wilson (Danny Glover), bizarre events start the countdown to Armageddon, including every disaster imaginable from tsunami-triggering earthquakes to mass suicides in Guatemala. President Wilson subsequently somberly informs his staff that, “The world as we know it, will soon come to an end,” while continuing to hide the truth from the general public.

Fortunately, Jackson is wise enough to jump into action, grabbing his kids (Liam James and Morgan Lily) and his ex-wife (Amanda Peet). With the help of her amateur pilot boyfriend (Tom McCarthy) they fly off in the nick of time as the runway crumbles beneath the wheels of their rickety, rented propeller plane.

No hackneyed line proves too stale for these intrepid survivors’ lips as the take on one death-defying challenge after another. Brace yourself for inane banter uttered against the backdrop of incessant, blue screen pyrotechnics and explosions, tired exclamations such as “Don’t look back!” “It’s a brave new world!” “Life isn’t fair!” “Are you kidding me?” “Hit the deck!” and even (and I am not making this up) “Hold hands and sing Kumbaya.”

Besides the principal characters, we have an ensemble filled with the sort of ill-fated support players needed to feed the proverbial beast of the typical, high body-count affair. Among the A-list actors whose talents are squandered in dumb subplots here are Thandie Newton, Oliver Platt and George Segal.

An eye-popping, insult to the intelligence strictly for the kiddies and crackpot doomsday enthusiasts.