The Boy in the Striped Pajamas (PG-13 for mature themes) Holocaust drama about the 8 year-old son (Asa Butterfield) of a concentration camp commander (David Thewlis) whose forbidden friendship with a Jewish boy (Jack Scanlon) interned on the other side of the fence leads to devastating consequences.

Soul Men (R for nudity, sexuality and pervasive profanity) Samuel L. Jackson and the late Bernie Mac co-star in this road comedy about a couple of R&B legends who reunite for a memorial concert at the Apollo in honor of their recently-deceased front man. Directed by Malcolm Lee, ensemble cast includes Sharon Leal, Jennifer Coolidge, Sean Hayes, John Legend, Ken Davitian and the late Isaac Hayes. 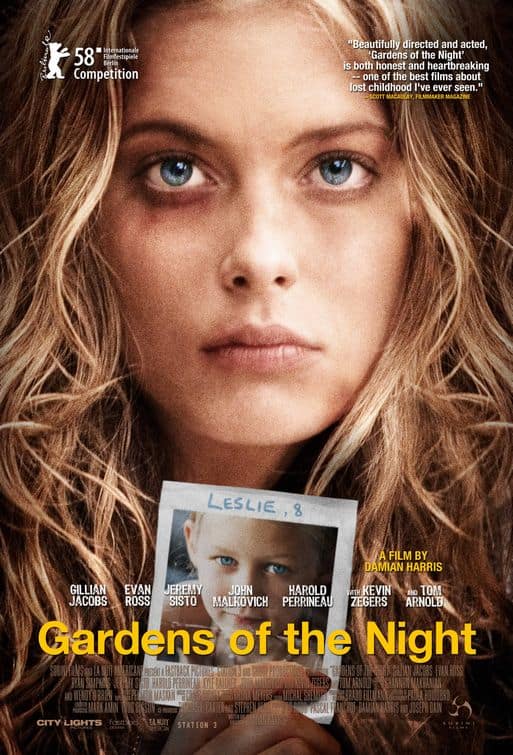 Eden (Unrated) Romance drama, set in Ireland, revolving around a woman’s (Eileen Walsh) desperate effort to save her disintegrating marriage when her husband (Aidan Kelly) of ten years starts hanging out in pubs where he has his head turned by younger women.

Gardens of the Night (Unrated) Gillian Jacobs and Evan Ross co-star in this harrowing drama about a couple of traumatized 17 year-olds struggling to survive on the streets after enduring years of abuse in captivity as the sex slaves of a child molester (Tom Arnold) Cast includes John Malkovich, Harold Perrineau, Jeremy Sisto and Cornelia Guest.

The Guitar (R for nudity, sexuality and profanity) Nothing left to lose musical drama about a just-dumped, recently-fired, terminally-ill woman (Saffron Burrows) who decides to max out her credit cards while on a self-indulgent spending spree during her last days on Earth.

House (R for terror and violence) Spooky slasher flick, set in rural Alabama, about two couples on the run from a maniac bent on murder who end up fighting for their sanity and survival in a haunted house in the middle of the woods. Cast includes Allana Bale, J.P. Davis, Michael Madsen, Leslie Easterbrook, Julie Ann Emery and Bill Moseley.

JCVD (R for profanity and violence) Jean-Claude Van Damme plays himself in this crime comedy about an aging action star who lands back in the limelight when he ends up in the middle of a real-life hostage drama. (In French and English with subtitles)

Pray the Devil Back to Hell (Unrated) Feminist documentary chronicles the extraordinary efforts of the group of visionary women who spearheaded the peace movement which led to the end of Liberia’s decades-long civil war and the rise to power of Ellen Johnson-Sirleaf, Africa’s first elected female head of state.

Repo! The Genetic Opera (R for profanity, sexuality, drug use, graphic violence and gore) Sci-fi horror flick, set in 2056, about an enterprising biotech company which turns from savior to monster during a planetary epidemic when it begins repossessing transplanted organs from patients who can’t pay their medical bills. Cast includes Paris Hilton, Paul Sorvino Joan Jett and Bill Moseley.

Stages (Unrated) Dysfunctional family drama, set in Amsterdam, explores the strained relationship of a divorced couple (Elsie de Brauw and Marcel Musters) who continue to squabble while sharing concerns about their troubled, 17 year-old son (Stijn Koomen). (In Dutch with subtitles)

The World Unseen (PG-13 for sexuality, violence and mature themes) Homoerotic drama, set in South Africa under apartheid during the Fifties, about the forbidden love which unexpectedly blossoms between an East Indian cafe owner (Sheetal Sheth) and a pregnant, married woman (Lisa Ray) also of Subcontinent extraction.