There should be a rule that movies helmed by actors turned directors need to come with some sort of equivalent of the Surgeon General warning label. And recent histrionic examples, including Sean Penn’s Into The Wild and now Anthony Hopkins’ Slipstream, more than prove this point. This may indeed be the reason why actors in movies require directors. With anarchy and confusion as dramatic devices, and more impulse and emotion than structural substance, subtlety and discipline, Slipstream is like a master chef’s elaborate creation that somebody forgot to put in the oven. Or left it in way too long. Did I hear half-backed, or overcooked? 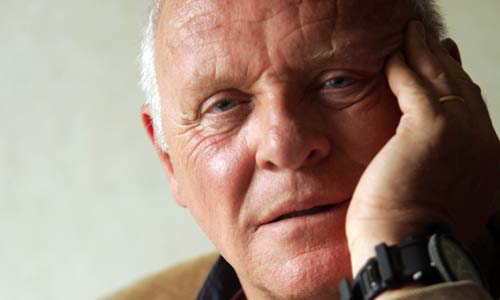 Taking place primarily inside the head of Hollywood screenwriter protagonist Felix Bonhoeffer, played by Hopkins, Slipstream seems to bounce in and out of the psyche of the alternately frustrated, depressed, withdrawn, pessimistic and sarcastic scribe, without much rhyme or reason, and far more than necessary or advisable. After attending the local racetrack with a younger woman, Felix is confronted by a gun toting psycho motorist in a freeway traffic jam, and may in fact be shot dead. But the story continues to a California desert movie set where a hyperactive star (Christian Slater) suddenly dies, presumably from taking his character too seriously, a nasty, stressed out retro-noir gangster who gleefully guns down a desert eatery cuckoo clock. At which point a reluctant, creatively paralyzed Felix is called in to perform emergency surgical script rewrites. However, he may be sidetracked by his sudden need of emergency surgery of his own after his collapse.

The ensuing convoluted events go from bad to worse, as fantasy films within films and scenes within scenes pile on top of one another, and layered with gimmicky special effects devices as Hopkins appears to be carried away behind the scenes like a kid with a toyshop full of videogames. Assorted meaningless distractions keep popping up into the picture too, including abandoned doll heads, furry spiders, dead crows and talking buzzards in the desert, vintage news footage of Nam, napalmed children and Nixon, a Dolly Parton wannabe lookalike behind the cash register at a desert greasy spoon, and costars like John Turturro’s studio pseudo-honcho running around in a panic, stuck in Felix’s hard drive.

Slipstream may be a movie about writer’s block, but a more serious problem afoot is director’s block. There is one pearl of cautionary wisdom to be gleaned here, when one dismayed character written out of the movie complains, why did you kill me off, I was just the script supervisor and now you’ll have no continuity. Amen.