Be Kind Rewind is an affectionate if kooky tribute to the collective fantasy life of the nation, whether you’re talking Ghostbusters, King Kong or, yes, Passaic New Jersey’s own – jazz great, Fats Waller. This mock doc within a mock doc and much more, also goes to extremes when it comes to the inner filmmaker in everyone that may be struggling to get out, and not just those getting studio big bucks budgets to do so. But writer/director Michel Gondry (Eternal Sunshine Of The Spotless Mind), who tends to both challenge and subvert all known existing limits and boundaries of what passes for cinema, may be an acquired taste for some, and for others simply too terminally sentimental cute for its own good.

Two parallel tales intertwine through Be Kind Rewind, which plays out across inner city Passaic back when videotapes ruled. There’s a quirky homage to local native son Fats Waller, which serves as backdrop to the antics of Mike (Mos Def) and Jerry (Jack Black), a pair of bottom feeder weird guys at a seedy video store in town. The shop’s owner, Mr. Fletcher (Danny Glover), who is an avid Fats Waller fan, is leaving town for a convention honoring the jazzman and is seriously worried that Jerry, the decidedly flakier of the two, may bring disaster in his absence.

But even persuading regular customer Miss Falewicz (Mia Farrow) to check in on the store while he’s gone, proves insufficient. That is, when ecological worry wort Jerry infiltrates the power station across the street to investigate possible toxic contamination, and ends up being zapped by the electrical fence and, well, totally magnetized. So the next time he stops by the store, Jerry and the radiating electrodes emanating from his body inadvertently erase all the videotapes. 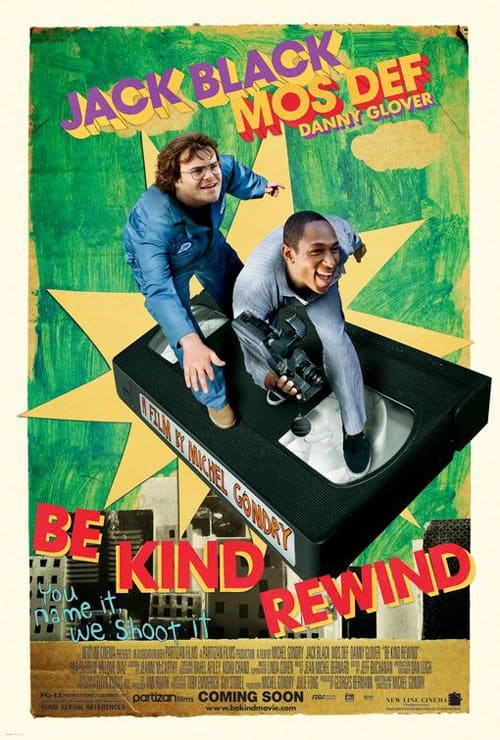 So begins a damage control crisis before Mr. Fletcher returns to town, where the two nutty comrades reenact movies like Rush Hour and Carrie, to replace all the damaged goods as quickly as possible. This frantic effort includes borrowing local babe Alma (Melonie Diaz) from her gig at the dry cleaning shop, to do a little love interest duty.

The sorta remakes are as outrageous and absurd as can be, not to mention never more than twenty minutes long. But the neighborhood is loving it, and coming out in droves to rent them because, hey, it’s all strictly homegrown and motivated by creative passion and love of the craft, however incompetent, and not by fame or fortune. Which in the end gets the whole town fired up about going beyond those goofy knockoffs and honoring one of their own on celluloid – Fats Waller, who else.

Be Kind Rewind may be just a little too manic and disjointed as a movie. But its people’s cinema rough cut heart is so squarely in the right place over in Passaic as opposed to Hollywood, that its pretty much hard to resist.