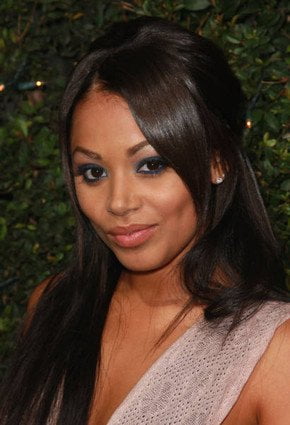 Born in Los Angeles on December 5, 1984, Lauren London developed a taste for acting in junior high, although she would be home-schooled following her freshman year of high school. Nicknamed L-Boogie, the 5’2″ cutie got her start in show business appearing in hip-hop videos by Ludacris and Pharrell.

Despite making a big splash as an actress as T.I.’s girlfriend in ATL, Lauren recently returned to her musical roots to jiggle in Common’s music video for his hit single, “Drivin’ Me Wild” (see http://www.youtube.com/watch?v=QHS-ShDmai4&feature=related) Here, the earthy beauty with that “girl next door” allure, talks a bit about her new movie, This Christmas, an ensemble dramedy co-starring Delroy Lindo, Loretta Devine, Idris Elba, Laz Alonso, Mekhi Phifer, Columbus Short, Chris Brown, and a host of others.

KW: You’ve really skyrocketed to fame after making such an impressive debut opposite T.I. in ATL. Do you feel at all lucky?

LL: I feel really lucky. It’s like, “What did I do to get this blessed to work with these people so early in my career?” This is only my second film out, so I’m extremely blessed to get to work with such a great cast.

KW: Who did you get along with on the set?

LL: I just bonded with Regina [King] and Sharon [Leal]. It was a good, good family atmosphere.

KW: You probably weren’t even born when Regina got her start in showbiz on 227, were you?

LL: But I did watch reruns of it on TV.

LL: I would say that one of my best Christmases memories was just being with my mom, my aunt, and my little cousin. It was a small Christmas, but it was just shared with us.

KW: What was your worst Christmas?

LL: You know, I haven’t had a worst Christmas that I can think of. If you live to see Christmas, it’s a good one.

KW: So, Santa never left coal in your stocking.

LL: My mom tried the Santa thing, but I was like, “We don’t have a chimney. So, where’s Santa gonna’ come through?” And sometimes Santa wouldn’t bring a lot of presents.

LL: I would say all the House Party movies, because I grew up watching them. Kid ‘N Play cracked me up, just looking at Kid’s hi-top.

KW: This Christmas revolves around secrets. Why do you think people keep secrets?

KW: Will the film have a universal appeal?

LL: I think that in any family… black, white, Chinese, Spanish, whatever… family is family. You know that there’s dysfunction, and that there’s this cousin who doesn’t like this auntie. But, at the end of the day, like I say, love brings everybody together. I think anybody from anywhere can relate.