The Gospel According to Luke

Derek Luke was born in Jersey City, New Jersey on April 24, 1974, one of three boys who blessed the holy union of his parents, Marjorie and Maurice. After graduating from Snyder High School, Derek headed to L.A. where, as legend has it, he was discovered while working in a gift shop on the lot of Sony Pictures. He was plucked from obscurity by Denzel Washington to play the title role in Antwone Fisher.

An overnight sensation, Derek has gone on to enjoy a storybook career, appearing opposite some of the best in the business in everything from Pieces of April to Spartan to Catch a Fire to Lions for Lambs to Miracle for St. Anna. Here, Derek discusses his latest outing as Sean “Puffy” Combs in Notorious. 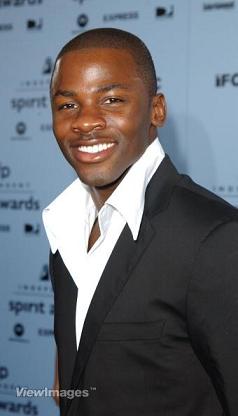 KW: Hey, Derek thanks for the time. I was at a wedding recently where I sat next to Gayle Ford who says she met you over the holidays through Carl Dixon.

KW: The Derek Luke legend is that you were discovered working in a gift shop. Is that true?

DL: Actually, I had stopped going to acting classes, and was supporting myself while pursuing my dream of acting. I got wind of an audition, and that audition went okay, and I ended up auditioning again. But then the film was shelved for a couple of years. Overall, I ended up auditioning for Antwone Fisher about five times before I got a chance to meet Denzel Washington. After I was back at work folding clothes and selling videos, Denzel came into the store while the real Antwone Fisher happened to be a customer. And as I was bagging him up, Denzel came in and said, “Yo, Antwone! I’m talking to you Derek Luke. I hired you. You’re my Antwone Fisher.”

DL: I think it was the swag. I once heard Richard Gere say, “When I did Chicago, it was fun and reminded me about what acting was.” When you do anything, it should be fun. And that’s why I actually chose to be a part of this.

KW: What do you mean by swag?

DL: Swag is sort of your personal memorabilia. It’s like the shadow of who you really are. It can be your walk, your talk…

DL: Yeah. I did the film because there aren’t a lot of times where the brand for the film is swagger, and I was excited about that.

KW: What did Puffy think of you playing him?

DL: My getting the role was based on his recommendation after his seeing me in Friday night Lights. He thought that the character was kinda similar to who he was and shared a lot of his aspirations. I didn’t have to audition for the role because that movie auditioned for him, and he told me, “If anybody ever played me, I would want you.” From there, we developed a bond, and today we’re friends.

KW: I heard Lil’ Kim isn’t too happy about how she’s portrayed in Notorious.

DL: I would just say that the movie shows a lot of empathy for her character, and she might be surprised once she sees it. I think Naturi Naughton did a wonderful job with the material that she was given.

KW: Who do you think killed Biggie?

DL: Oh man, maybe you can ask Chris Rock. He joked that they can find Saddam Hussein, but they can’t find a killer who committed a murder on one of the busiest streets of one of our busiest cities. I would just say that God knows. I firmly believe that the film will comfort the hearts of those who have been mourning some of hip-hop’s greatest to date. As the scripture says, “It ain’t about the soul, it’s about where your spirit rests.”

KW: When you were a kid, did you pick a side in the East Coast-West Coast gangsta’ rap war?

DL: Fans are sometimes the last to know you’re being deceived. There was no East Coast-West Coast beef originally. What transformed love into hate? That has to be asked. This is the first time that it’s come out of my mouth as analyzing who we are as a generation. This is why I wanted to be a part of this film, because the voice has to be bigger than the opinion. That’s why I wanted to play Puff. I didn’t owe him anything, and he didn’t owe me anything. But as a fan, I had to become very neutral, and put aside my personal opinion. I refused to hate a coast. That’s ridiculous! I found out that it was a media-generated controversy.

KW: Tasha Smith asks: Are you ever afraid?

KW: Yeah, the actress in the Tyler Perry movies.

DL: Oh, my goodness! Right. Am I ever afraid? No matter what project, I’ve always had to bind up and wrestle fear, because acting is really about faith. And faith and fear can’t really stay in the same room. So, in order for you to be more than a conqueror, you’re going to have to defeat fear with faith. If you’re in a present body, you will be dealing with that spiritual aspect, since fear is present.

KW: I ask everybody that.

DL: The only times that I haven’t been happy is when I haven’t connected my purpose with my career because fame is lonely without purpose.

DL: I don’t want to tell everybody that.

KW: How about just a hint.

DL: I live kinda off in The Valley.

DL: Mostly the women in my life, because they pray for me.

DL: It’s diverse. I listen to everything from Miles Davis’ Sketches of Spain to 50 Cent and Jay-Z.

KW: Did you attend the inauguration?

DL: I’m very excited about President Obama but I could only be there in spirit because all the hotels were sold out.

DL: I’d just like it if people would ask questions finding out who we actors are as individuals and finding out what we have to say. Every movie that I’ve been in is a part of a plan and a message. It’s not just happenstance.

KW: Thanks again Derek and best of luck.

DL: Thank you very much.

To see a trailer for Notorious,