Alison Sudol is One Fine Frenzy

Bruce Edwin: And I read that you opened for the Stooges!

Alison Sudol: Well, I think I didn’t know enough at that time about Iggy, and I was researching like crazy, before we did the show, and was just absolutely like falling over, blown away by him.

Alison Sudol: Like, when I was doing the research and stuff, so I think performing on the same bill with him, it meant so much then, but it means even more now, I think as I’ve gotten a little older, but I was bragging to any body and every body, and I’m not the bragging type, but I was telling every body.

Alison Sudol: And the Kings of Leon were on that same bill too, it was crazy, but yeah, just watching him up there, blew me away. 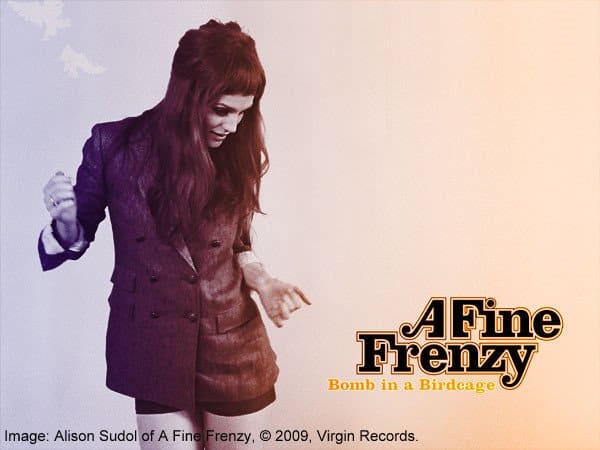 Alison Sudol: Well, I didn’t go to college, I figured I’d postpone it, because I was 16, I graduated high school early…

Alison Sudol: And I was really young for 16 in some ways….

Alison Sudol: (laughs) Nerdy! So the idea of going to college where people were like drinking, and partying, and smoking pot, it was too much. I was too scared. So I put it off, and then I never went, and a part of me has always felt, well, you’ve got to keep educating yourself, to justify not going to college, so, I just always try to read as much as I can, and try to talk to people that are smarter than me, and have done more, and try to absorb, you know, because, this lifestyle can lend a lot to one’s intelligence. It can help you, you can learn so much from the places that you go, and the people that you meet, if you choose to make that a point, you know, or, you can just like drink your self in to a stupor…

Alison Sudol: You know, but, I’m not very good at that.

Alison Sudol: Yeah, that’s what I got.

Alison Sudol: When I graduated high school, I met a few people who introduced me to other people, and I ended up being taken under the wing by a songwriter, (…) and she just took me to every writing session she went to…

Alison Sudol: And she took me every where, every where! And (she) was not easy on me by any standards (..) You know what I mean?

Alison Sudol: So she did that, and then she just kind of let me go when I needed to go, and go on my own, you know, and I had a band, and it was terrible, and blah, but I just kind of learned through trial by fire essentially, but I did what I didn’t want to do, and then I stopped everything, and just sat down at the piano, and started honing in on what I really wanted to do. From all of that other stuff of learning, and working with other people, and being taken in different directions, and absorbing, it was then like O.K., now you’ve got to find you in that, that was at 19, and the first song that I wrote was ‘Almost Lover,’ which is weird…

Alison Sudol: Yeah, like literally the first song I wrote by myself on the piano.

Alison Sudol: Thanks, it was a start, and it was honest, you know?