The second in a series of threatened sequels, New Moon is directed by American Pie helmer Chris Weitz, who may be a whole lot more adept at grossout and cinematic pastry than unconventional beverages. Less bloody than sudsy in the extreme and characterized more often than not by a host of intolerably lethargic vampires who’ve sworn off human bodily fluids as well as their famed vintage bat personas, New Moon seems to be a movie in search of a story that never materializes.

Opening as a flabby cautionary tale hinting at the perils of inter-tribal dating intimated in Romeo and Juliet, New Moon finds a still cranky and pouting Bella (Kristen Stewart) waking from a daymare in which she’s turned into her shriveled old grandma, while her more elusive than ever object of teen desire Edward Cullen (Robert Pattinson) remains as handsome a young undead hunk as can be. 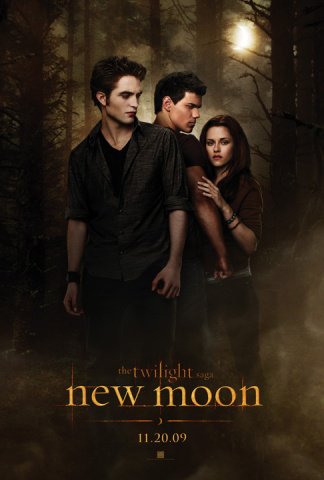 But aggressively competing for Bella’s heart is Jacob (Taylor Lautner), aka Biceps, a gym body underage boy toy from the local Quileute Indian tribe who may have identity crisis issues of his own. In any case, Cullen is outta here, still lovestruck but not wanting to mess up moody Bella’s life any further. Also showing up for a little crossover diversity in the mix, is a pack of ferocious werewolves, suppressing their inner humans when bent on disappearing luckless hikers in the woods.

Less engaging or surprising sequel than literally redundant pain in the neck perpetually unrequited romance, New Moon dwells far too long on the teen anguish of being dumped by a vampire. The movie also goes overboard mixing teen manimal desires and soaps style ‘days of our afterlives’ sulking, drinking disorder classmates and human paper cut pandemonium in the presence of famished vampires, with up to no good illegal border crossing undocumented, undead for no particular reason than as possible filler.

But hey, any guy who’d go on a diet and swear off the drink for the woman he loves, is a keeper for sure. Even if he’s already immortal and around forever anyway.