A lot of Bacon Freaks around the globe went to bed with a cynical sneer on their snout and woke up today feeling as if they had just been kicked in the pork belly. Last night, something “fishy” happened, that certainly felt to most viewers we have heard from thus far, to be a clear and coldly calculated “coup.”

By the way … for those of you who might have been hanging out back behind the barn during “skool,” we mean a “coup d’etat,” as in a surprise overthrow of the established order of things, not something out of the official “eat mor chikin” coop.

During the final episode of “Top Chef,” Bravo’s highly rated and increasingly popular culinary competition, this year coming to us directly from Sin City. Las Vegas, a sudden and simultaneous squeal of surprised agony filled the air as pork pandemonium publicly ensued.

You see, “Odds On Favorite” (Yes, in any event happening in Las Vegas, from horse-shoes to hand-grenades, there are bookies and casinos willing to take a bet) Chef Kevin Gillespie, a 26-year-old gentleman from Atlanta, GA, appeared to get “fried in the end,” both literally and symbolically.

Most Master Chefs and cooks that we know all strongly favored Chef Kevin as the one who would prove victorious in the sixth season of the “Top Chef'” television competition. To many, it already seemed set in stone that Kevin would prove to be the clear favorite to win the prestige, publicity, popularity and prominent prize package of $100,000 in seed money to help open his own restaurant.

As if that weren’t enough, the winner also received a feature in the highly esteemed “Food & Wine” magazine, a showcase at the annual “Food & Wine Classic” in Aspen, Colorado; and another $100,000 worth of merchandise to be provided by the good folks over at Macy’s.

But alas, instead of popular and respected Chef Kevin coming in on top, Chef Michael Voltaggio, who, according to most of the people we know who are intimately associated with the show, may very well prove to be one of, if not “the most” unpopular contestants ever featured in the six years of the series, was surprisingly and mysteriously crowned the contest’s “Consummate Culinary Connoisseur of Cuisine.”

While the world did not take the news calmly, Kevin himself was very polite, cordial, and respectful about the decision and wished sincere congratulations to the surprise winner and appreciation to the judges who booted him and sponsors, officials and staff of the “Top Chef” show itself.

“I’m proud of making it this far and I’m proud to lose to people as good as Bryan or Michael.” Kevin explained when it was all over but the world-wide shouting. Kevin went on to say “”I had a bad day. It just sucks one day ruined it for me.”

So what exactly does that “Bad Day” specifically entail, you ask. According to what we could get from the Judges decrees, it appears to be a bit of a “back lash” to the public popularity of “pork bellies.” 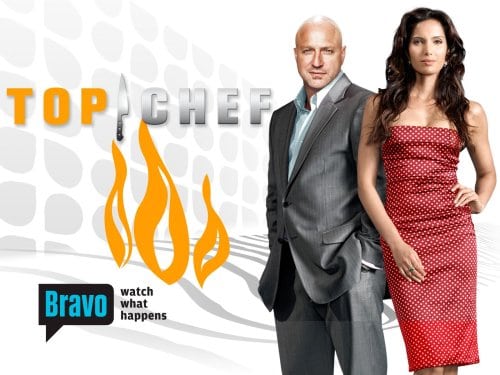 It seems that the judges, though they both claimed and appeared to LOVE Kevin’s culinary creations and they most certainly “ate them up” with enthusiasm, didn’t appreciate the fact that his menu included two pork products in the ingredients.

Why there was no apparent penalty or upheaval due to the fact that the other competing chef’s recipes included two helping of fish, or two usages of the same vegetables, no one seems to know.

So what exactly was Kevin’s decapitating sin in “Sin City?”

It appears, that while the rest of the world is practically pleading for more pork, this particular panel of palate palsied judges didn’t appreciate this “Georgian Gentleman” bringing a little “Southern Sizzle” from way down home, below the Mason Dixon Line, serving up “slow cooked pork belly served with roasted broccoli and Brussels sprouts and finished with a caramelized ham jus.”

Then … I do declare; this raucous “Rebel” went so far as to serve up a dainty, deliriously delightful and deliciously delectable dessert dish of “Roasted banana, topped with crispy bacon and served with a chocolate bacon mousse and peanut bacon brittle.”

“My Oh My” …. the very insolence of this cad, how dare he … and in “mixed company” as well, the spectacle … the shame … the absolutely horror!

Well, the judges made their final decision and Kevin was sent back home to Georgia, but there are millions of “real judges” who were thrilled to catch an ever so slightly sweet and salty glimpse of the sizzle that Chef Kevin has in store for us when some perceptive and “culinarily creative” benefactor wisely makes his or her mark in the “fabulous field of food” and invests in this outlaw “Baconista’s” dream about to come true!