Popular newsletter growing a whole lot faster and with more credibility than the U. S. economic recovery

Initially published to simply create affordable meals, the Dinner On A Dollar free eNewsletter is developing into more than just ways to save your money. Now it contains a gardening section to cut food costs by growing produce, and is moving to healthier recipes (always with an eye on family budgets). After all, food is the second largest expense of every American household.

One of the better ways to cut costs is introducing new meal creation ideas as well as resurrecting sometimes forgotten items.

Quinoa, pronounced “keen-wa” has lately been the subject of several DOD eNewsletters. This ancient grain is one of the most important foods on grocery shelves, however most shoppers aren’t fully aware of all Quinoa does. Quinoa is technically not a grain, but a seed which comes from dark green leafy plants. Quinoa earns this mistaken category because of its grain-like texture. Versatile Quinoa has been cultivated in the South American Andes for more than 5,000 years. There it is known as “Inca gold,” and is often referred to as, “Mother of every grain.”

Dinner On A Dollar publishers like it became it’s a good source of iron and magnesium, important for building strong bones as well as muscle relaxation which is beneficial to our circulatory system. High in iron, essential for carrying oxygen to the brain, heart, and lungs, the big Q plays a large part in keeping our immune system tuned up, and helping us stay alert, and energized. Containing a whole host of nutrients, Quinoa boosts necessary bioactive compounds as well as being a good source of weight-control fiber.

Quinoa contains all essential amino acids, making it a complete protein and a terrific source for a variety of minerals. A major benefit for any who suffer allergies is that it is also gluten-free.

Quinoa is prepared like rice except it requires half as much time to prepare. So the next time couscous or rice is required to fill out an inexpensive, healthy and yes, ever important ‘tasty’ meal, think of Inca Gold. Quinoa flour enhances nutrients in breads and pastas.

The Dinner On A Dollar newsletter offers quick fun ways to make the most of Quinoa and other ‘super’ whole grains available including buckwheat, millet, spelt, and kamut to name just a few. Kamut is 42% higher in protein than wheat, along with high amounts of Vitamin E, zinc, and magnesium. Among gifts offered by Buckwheat are various flavonoids providing powerful antioxidants for free radical protection. 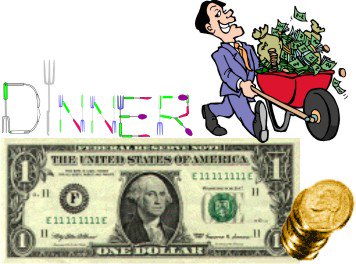 What Makes Dinner On A Dollar So Hot?

Easily digestible, Dinner On A Dollar serves up educational information packed with ways to save your money as you shop, shop, shop. You can pick up freebies in the “Cheap Is Good – Free Is Better” section, grow gardens to ease cash outflow, and hit Dollar stores to up your buying power. Included recipes inspire followers to kick off your own creative meals, costing only a dollar and perhaps change, and less than two dollars per person, always.

For two years, DOD has never wavered from its goals of public service and delivery without charge to readers who sign up. It has expanded to reach out to all Americans having a tough time with food costs. Last year DOD focused on Native Americans. It is now turning it’s attention to assisting Military Families.

Although a U.S. Internet publication, it today attracts readers from 26 countries outside the U.S.

Pushed by damping down of a buying public, Nordstroms, Saks, and Macys price-level shoppers moved to Pennys. Pennys shoppers downgraded to Target, Target shoppers slipped to financial outlays of Walmart merchandise. Those same people collectively now prefer to frequent the swinging doors of the Dollar Tree, Family Dollar, Dollar General, 99 Cents Only and today into Aldi Grocery. Aldi the newest player, a deep discount German chain, is now moving aggressively across the U.S., and is already established in 31 states.