Hello Bacon Fans, I am on a quest to find the best bacon recipes. So I have used the network of restaurants and chefs I have built and have asked them to provide me with their favorite bacon recipes. We have had so many entries I may need to turn this into a contest!

Among our first entries was Red Lobster. They recently added Wood-Fire Grills to all restaurants nationwide. In addition, Red Lobster added several new menu items – including Peach Bourbon BBQ Shrimp & Bacon Wrapped Scallops. Two of my favorite words – Bacon and Bourbon. I think that just might make for a good drink idea!

This recipe was provided by Michael LaDuke who is the Senior Executive Chef at Red Lobster and is responsible for leading the culinary team in the creation of fresh, delicious seafood for their menu. 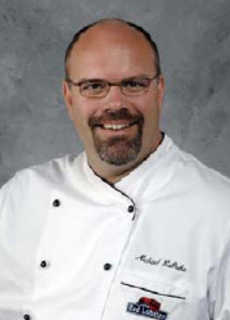 4 each two-prong metal skewer for scallops

Salt and pepper to taste

2 cups of your favorite BBQ sauce 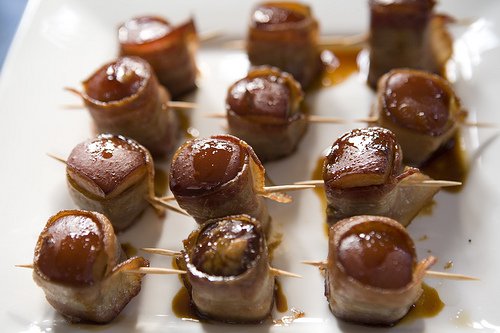 1. Place shrimp next to each other on a bamboo skewer, leaving room on either end. Make sure to cover the end of the skewer with foil so it doesn’t burn.

2. Wrap one piece of bacon around each scallop and place scallops on a two-pronged skewer so they don’t turn.

3. Brush both sides of the shrimp and scallops with olive oil and season with salt and pepper

4. Place the shrimp and scallops on a medium hot grill. Keep an eye on them because they will cook quickly and you don’t want to burn them.

5. Grill shrimp and scallops for approximately 2-3 minutes per side. Take them off the grill when they are about 80 percent done.

6. Add the Peach Bourbon BBQ sauce during the last moments of cooking or when the cooking is complete for added flavor.

1. Combine all ingredients in a small sauce pan.

2. Bring to a simmer while stirring for 8-10 minutes, allowing the alcohol to cook down.

3. Cool and blend in a food processor or blender until smooth.

Visit www.redlobster.com for more information on this tasty dish.