It’s called “Bacon Pizza,” and it’s a delectably delightful and decadently delicious dish that is relatively simple to create, but when cooked outdoors on the public grills provided by Prospect Park in Brooklyn New York, it is a palatable prospect promoting persistent passion and patience in the preparatory process.

What exactly is Bacon-Pizza you ask? Well, the foundation of the pizza is a made in traditional circular form from a combination of wheat and multi-grain flour, seriously sprinkled / smothered, with shredded sharp cheddar cheese and then covered with literally tons and tons pf already grilled gourmet bacon. To finish it off, add another hefty layer of cheddar cheese and then your sauce of choice. 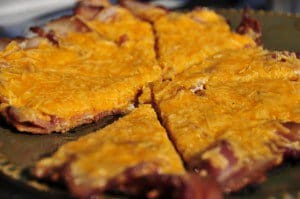 The Brooklyn Bacon Party went with a spicy little hot sauce to top their crusty creation off. Personally I would go with a gourmet pasta sauce that is heavily spiked with the spicy hot sauce, but to each his own, this is America, home of the Free. 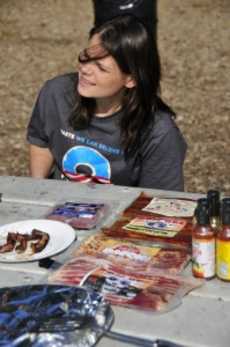 The pizza is then baked in a make shift, custom created oven situated on the public park grill for approximately10 minutes or till you see the cheese fully melted and the beautiful bounty of bodacious bite-able bacon bits staring up at you through the yellow, simmering goo, which is now lightly browning and taking on a slight “baked” look to it!

What you end up with is the most delicious pile of grilled cheesy bacon you ever dreamed of!

Warning, this pizza smells so amazingly awesome, that natural and unnatural wild life will be drawn to the event by the alluring aroma of this seductively simmering, sizzle of succulence! In Brooklyn, the smell of bacon brought visits by a caravan of carnivorous cats and a patrol of police officers. 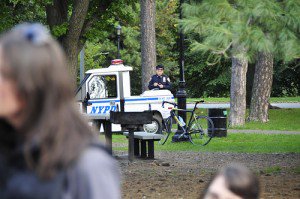 OK, this is the place where less respectful writers might place the almost obligatory joke involving the whole pork, pig, police, bacon, interaction, but I have way too much respect and consideration for the men and women who stand that thin blue line that keeps society from being overthrown and destroyed by chaos and crime, so I refuse to go there!

The outcome: Are you kidding? A wondrously awesome time was had by all.