Located on Ocean Boulevard in Santa Monica is Chez Jay, a quaint rustic restaurant and bar noted as a celebrity “dive.” Sawdust and peanuts cover the floor of the 10 table restaurant.

It’s history dates back to 1950. Jay Fiondella, the original owner, whose flamboyant style attracted the who’s who of Hollywood, took pride in serving the best steaks and seafood, making sure his guests weren’t disturbed by paparazzi photographers. Jay appeared in many films and continued to appear in films, while playing host to his celebrity friends. Just about anyone who was a big star would hang out at Chez Jay. Marilyn Monroe waited in the back booth for Robert Kennedy and Marlon Brando found one of his loves there.

Jay Fondella whose stage name was Jay Della, appeared on Sea Hunt and finished his last film Luck of The Draw, a few years before he passed. One of the most unique situations which occurred at his restaurant was the evening Alan Shepard, commander of Apollo 14 dined with a friend.

Jay, in a jovial way persuaded Shepard to take one of his restaurants traditional peanuts with him to the moon in 1971. That got Jay a signed letter from Shepard, which is on display at the restaurant. Today, Michael Anderson, the current owner, along with Jay’s sister continue the tradition of serving fine food with a friendly atmosphere and great service. On the evening I was dining, Tom Hallick, formerly Brad Elliott of The Young and Restless joined me with Ed Magik of Ed Magik TV. Now, let’s take a culinary journey. 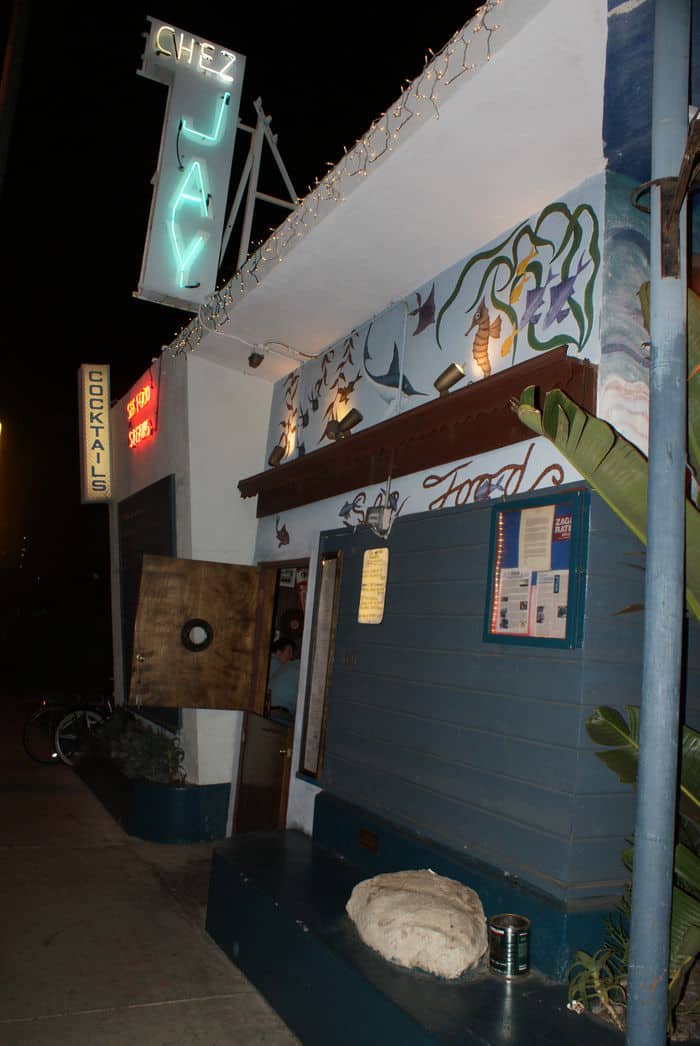 Our appetizers consisted od Scampi with Fresh Garlic and Shallots, Fresh Steamed Clams with Shallots and Mike’s Salad Grilled Chicken Breast with tomatoes, mozzarella cheese and roasted pepper with Poppy Seed Dressing. For three hefty eaters, this was a great way to converse and get ready for the main course. Mind you, Tom Hallick loves his Belgium Beer and I love my wine. Ed Magik loves his Coco Cola.

After meeting some nice people and speaking with Michael Anderson, we indulged in our main courses. Tom Hallick enjoyed the New York Fiondella steak, which was marinated with olive oil, spices and bread crumbs. I ordered Chicken Breast, Chez Jay and Ed Magik had Scampi Rice Pilaf. All entrees are served with soup or salad.

“This is the place where many of my celebrity friends dine and play cards in the back booth where we are tonight,” stated Tom Hallick. Every item was cooked to perfection and the service was prompt. With all considerations on dieting, it’s hard not to partake in some delicious dessert. The cheesecake Chez Jay and Chocolate Mousse top off the evening, as we parted off to the beach. Celebrity Scene News rates Chez Jay a hearty 10 for our dining journey.