I totally understand, respect and admire everybody being so very cautious and seeking the truth about the “SO CALLED” Swine Flu. Hey, I’m a family man myself and NOTHING is more important to me than the health and safely of my family.

So here are a few helpful facts that will put some peace in your heart and mind and a smile back on your face.

According to the CDC, which are the “Centers for Disease Control and Prevention” as well as the USDA, the United States Department of Agriculture who regulates and over-sees all foods in the U.S., Bacon, Sausage, ham and all other pork products are perfectly safe to eat.

The Swine Flu is NOT even the actual name of the flu, but is merely a media modeled “catch phrase” that is convenient for “sound byte” hype used to create panic and boost ratings, which means BIG ADERTISING DOLLARS for the media whenever there is a panic and people are “Glued To The News!”

According to the “Centers for Disease Control and Prevention” this current outbreak of the flu is actually called the “2009 H1N1 flu” and you absolutely CAN NOT get it from eating pork products.

Federal health officials say the exploited news hype about the virus that has triggered fears of a world-wide flu pandemic, but the “2009 H1N1 flu” is not transmitted by food!

Besides, whether there is a flu going around or NOT, All food-borne germs are totally killed when pork is cooked to the recommended internal temperature of 160 F.

There is no evidence that ANY American pigs are infected with the virus, or that people can become infected by touching uncooked pork according to the U.S. Department of Agriculture.

What the media is incorrectly calling the “Swine Flu” is spread the same way that ALL seasonal viruses are, mainly through sneezing, coughing and touching surfaces contaminated with the virus.

According to the Centers for Disease Control and Prevention, the best ways to prevent yourself and your family from catching “2009 H1N1 flu,” which most doctors are saying is actually a relatively mild flu strain and NOT some “Pandemic Killer” that the news would have you freaking out about, is to wash your hands before eating, avoid being in heavily populated areas for long periods of time, increasing potential risk of exposure!

Turns out, the pig is NOT the culprit in the case of this flu, the Victim. This flu strain is actually carried into most human populations by BIRDS, not Pigs, and spread to humans through contact with OTHER HUMANS who have contracted the virus. The originally called it the swine Flu, because PIGS are actually the most susceptible animal to catching and suffering illness from the virus, which they catch from unprotected contact with BIRDS & PEOPLE! 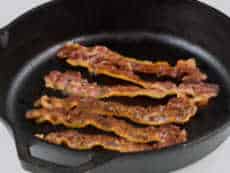 So cook you bacon, sausage, ham and other pork products at 160 degrees or above, which is actually a very low heat, I cook my pork at around 320 degrees and according to the CDC & USDA, you and your family will be perfectly safe!