During its earlier years, Las Vegas had its share of table-side service with flaming dishes such as Steak Diane, Brandy flamed Peppercorn Steak, Filet Mignon and desserts such as Cherries Jubilee and Bananas Foster to end an evening of dining.

Today, Las Vegas has become known as one of the great cities for dining. It is however not quite the same. Although the city has expanded to over 2 million residences, and visionaries such as Steve Wynn, who was the first to change the face of Las Vegas, with The Bellagio, The Mirage, Treasure Island, which he sold, to his properties today, The Wynn and The Encore. There are very few of those romantic dining experiences and there are hundreds of restaurants which are quite popular. 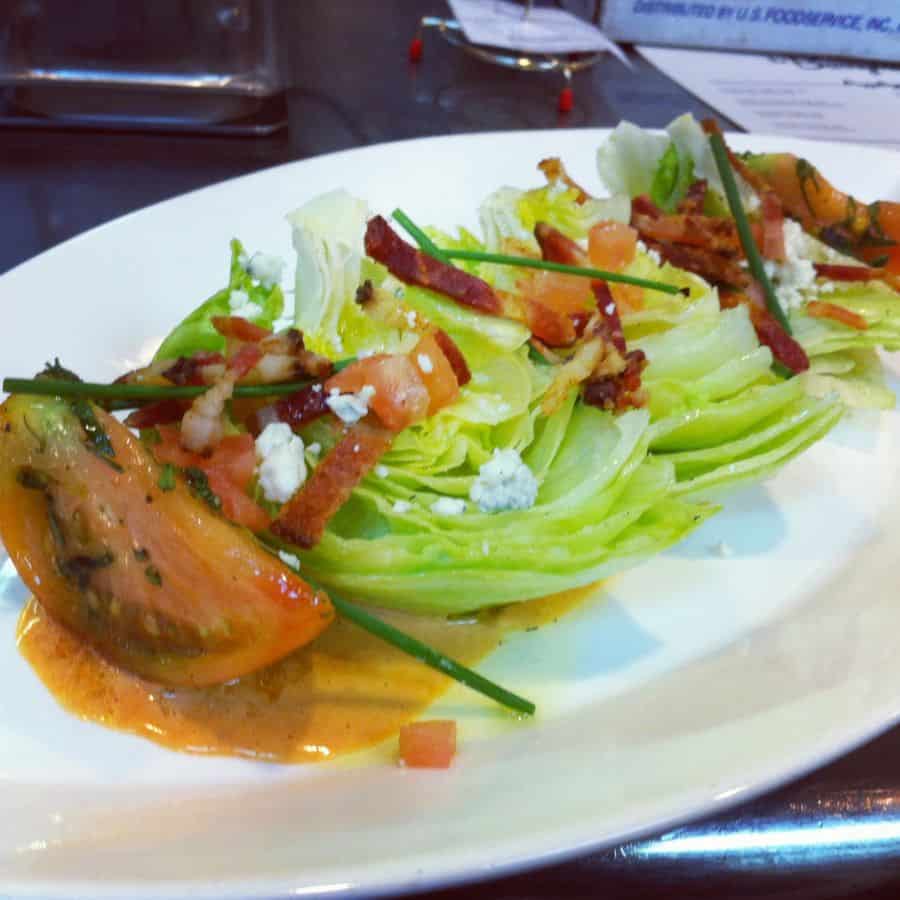 The way of life has changed and everyone seems to be in a rush. That is, at least in the United States. There is one restaurant owned by the Billy Richardson, whose family has an excellent reputation as builders and proprietors of Restaurants. Such is the case with the Barrymore at The Royal Boutique Hotel. The Barrymore brings back a touch of Vintage Las Vegas, with a contemporary feel. 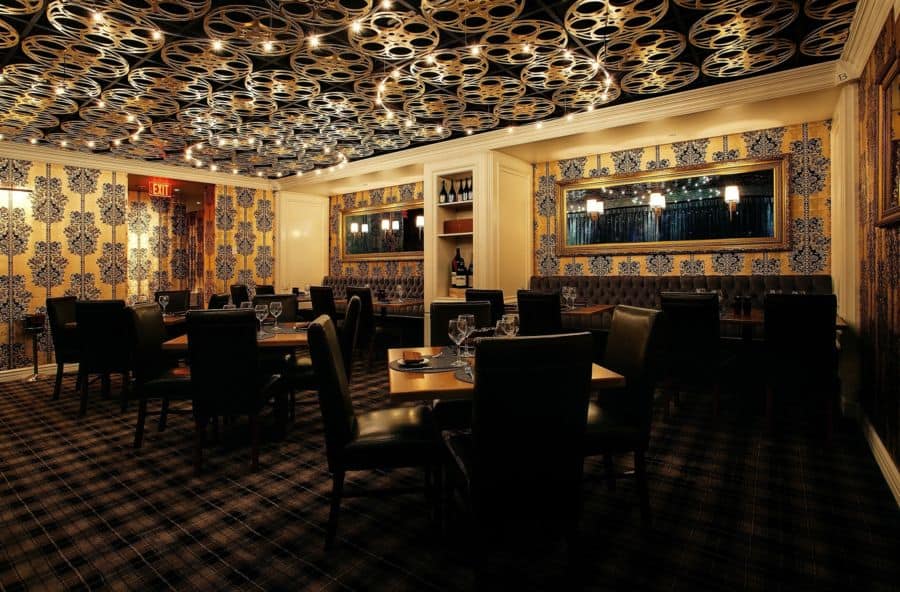 Rich in dark brown colors, with leather back booths, this is by far one of the hideaways to take a date or bring the family. According to Chad Jahn, the General Manager, the Richardson family has always enjoyed classic movies. Thus the name Barrymore was established from the old Barrymore Restaurant at the original MGM, now Bally’s. 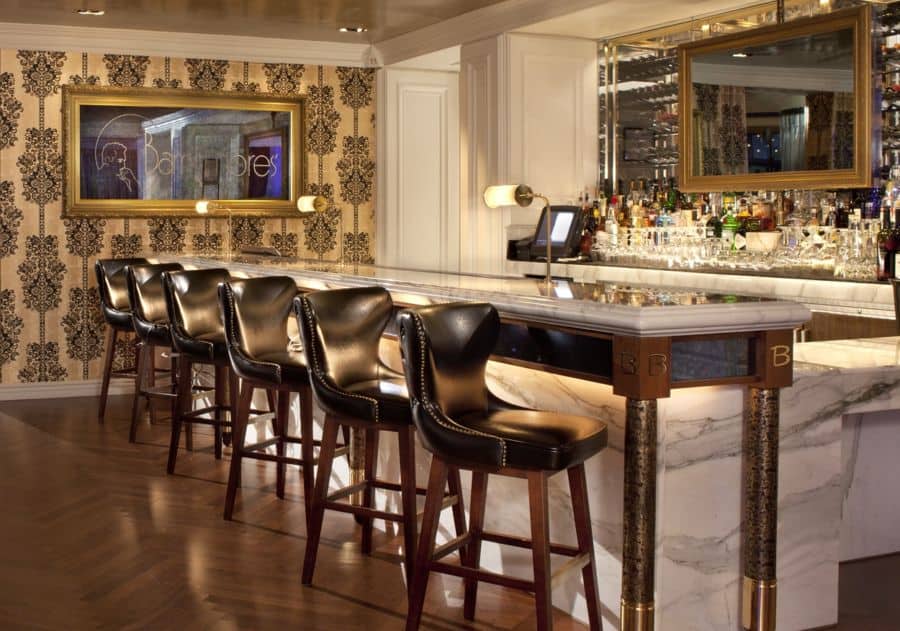 It was a relatively relaxing evening, when Mark Richards, my associate arrived at the Barrymore. Larry Liso, one of the lead singers in Shades of Sinatra at The Ray Wolf Theater, was singing the classics of Sinatra. Larry’s vocal sty-lings certainly added to our dining journey. 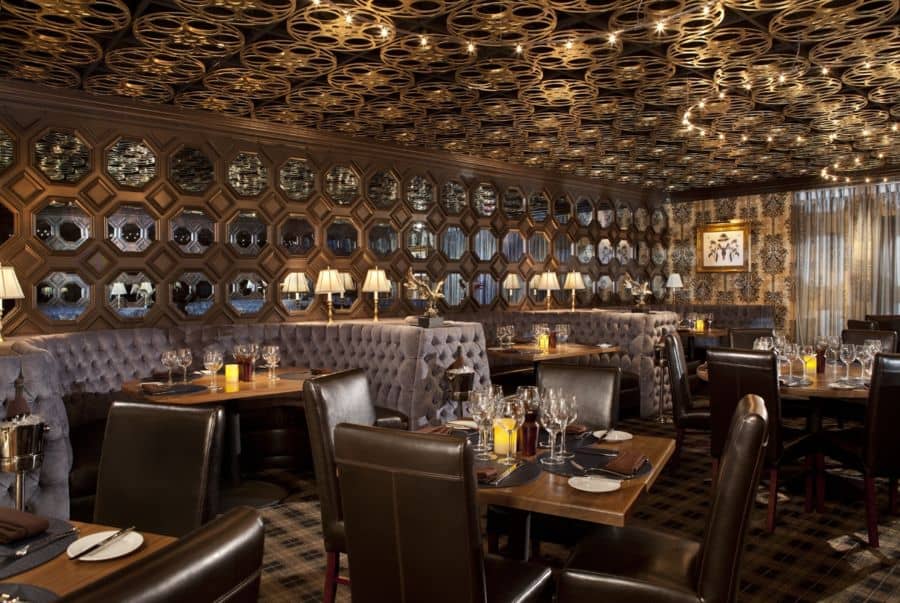 While waiting to be seated in the beautiful cocktail lounge, David Ferreira, the sommelier and Chad Jahn, the General Manager greeted us and escorted us to the main dining room. We started off our evening with a glass of Chianti Classico from Tuscan, Italy and Chardonnay Mt Eden, from the Wolf Vineyard in Edna Valley, California. 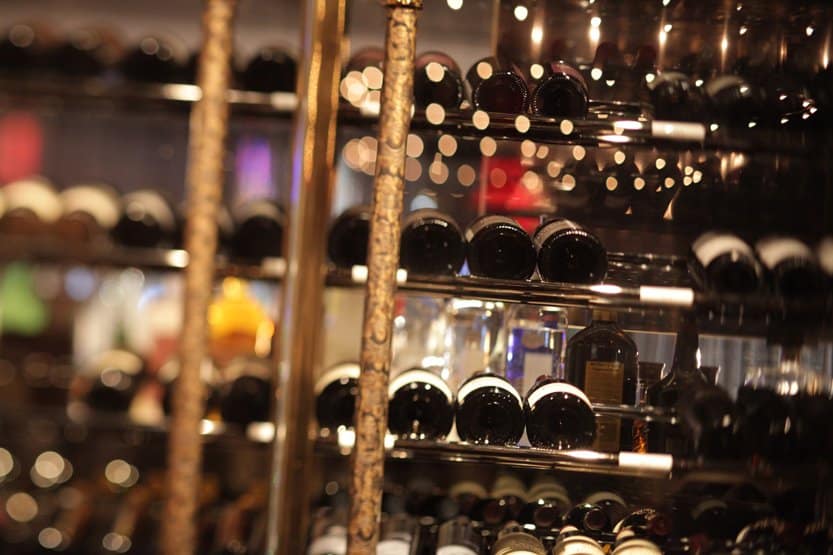 Israel Lopez, our waiter, recommended several appetizers that were some of the more tasteful I’ve enjoyed in a long time. The pan seared Foie Gras with rhubarb and fennel tart with strawberry compote was incredible. Served alongside the Foie Gras, were Veal Sweetbreads, which consist of bone marrow panesse and caramelized shallot in a bordelaise sauce.

The third appetizer, Catalan Style Grilled Octopus served with papa bravo’s spicy tomato, with chorizo oil and celery leaf, was a different presentation that was very tasty. Ah, with our tummies begging for more delightful cuisine, we were greeted by Chef de cuisine, Francisco Campa, who works under the direction of Executive Chef, Anthony Meidenbauer. 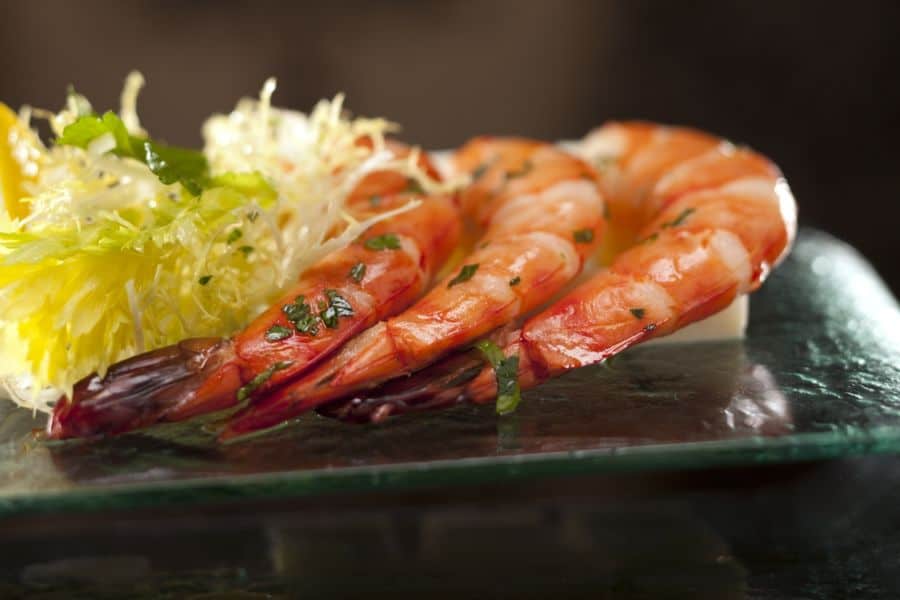 Our main entrees were an 18 oz Prime Omaha Bone-in-Ribeye, dry-aged for 28 days. It all comes with three sauces, which include selection of Pan seared Alaskan salmon. Our dinner was accompanied with a very fine bowl of whipped potatoes, grilled asparagus and Pan roasted Muscovy Duck, with heirloom carrots, comfit in an orange sauce. The Muscovy Duck and Alaskan Salmon were the most creative presentations I have ever seen. 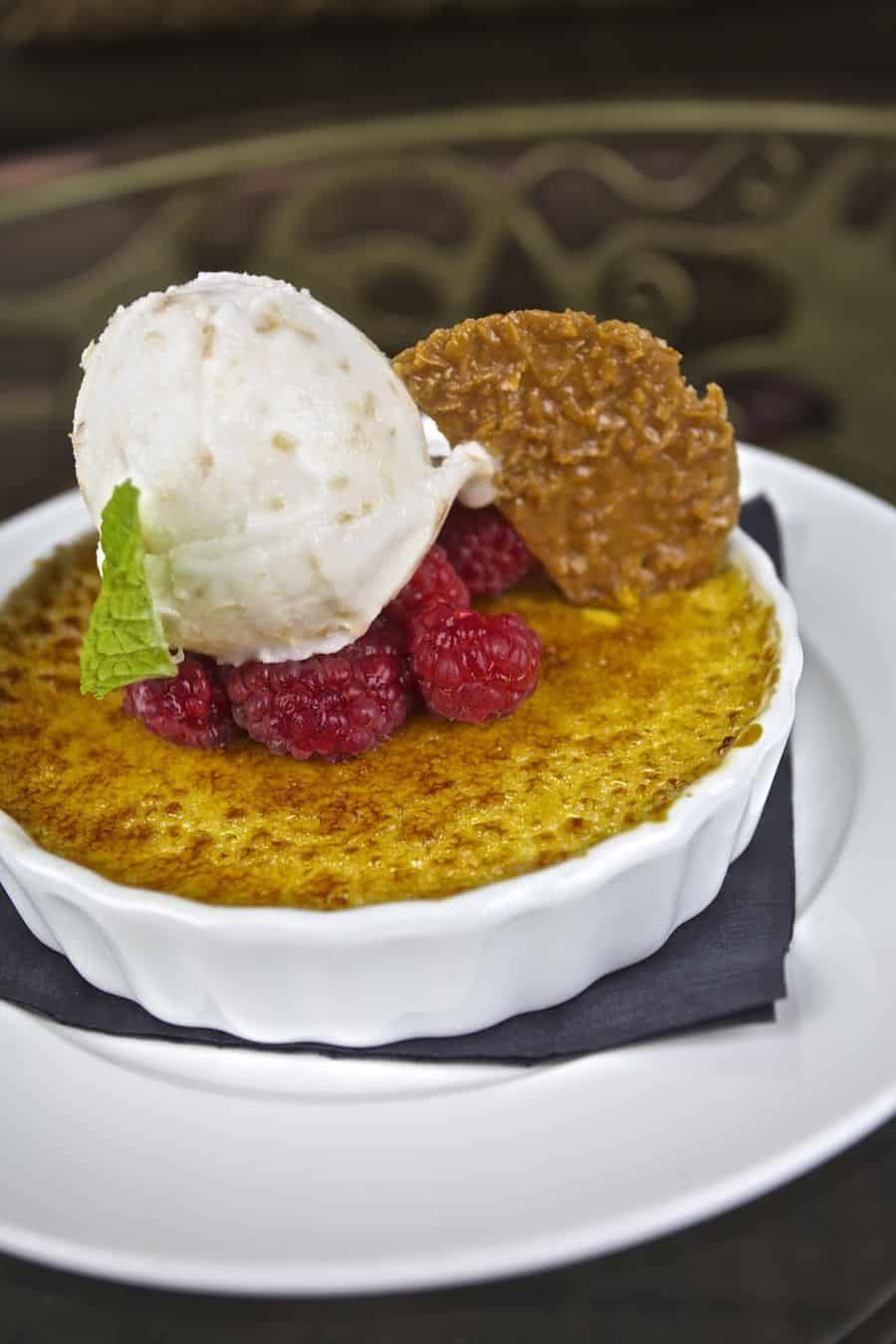 Rebecca Bills, the company chef for Block 16 Hospitality’s Holsteins Shakes and Buns, the Barrymore, Public House and LBS, creates taste sensations that are unique and different. Our desserts for this evening were a warm chocolate cake with praline fudge sauce with hazelnut brittle with a milk chocolate sorbet. We also were served Passion Fruit Creme Brule and a Vanilla Bean Cheesecake with graham crust, apple comfit with cranberry yogurt, and homemade Gelato with Cranberry caramel. I commend Chef Rebecca for her homemade desserts. 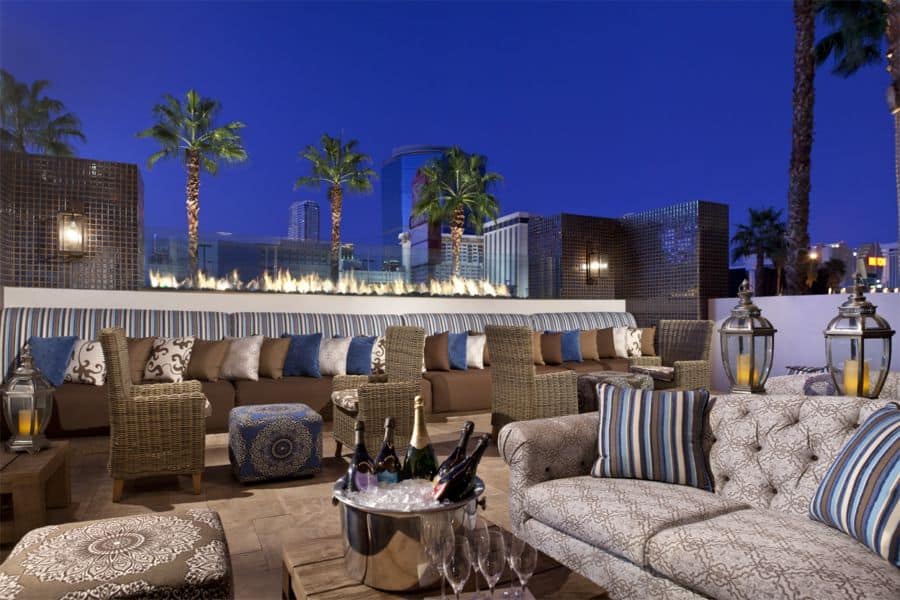 In ending our journey, Celebrity Scene News, awards the Barrymore 5 stars for excellent service, ambiance, quality of cuisine, and entertainment.

The hours of operation for this quaint dining spot is 5:30 pm-10 pm Sunday-Thursday and 5:30pm-11pm on Friday and Saturday.