During my travels, it always amazes me that certain restaurants stand above others. Parma Pastavino and Deli, located on 759 Washington Blvd. in Las Vegas, is one of those eateries where families love to sit back in one of their comfortable lounge chairs and partake in some very tasty cuisine. It’s almost like relaxing in your living room.

I didn’t realize that Marc Sgrizzi, the owner, was someone I knew from his prior restaurants and his boxing workouts at Johnny Taco’s boxing gym. Marc originally grew up in Upstate New York, later moving to Florida with his parents. 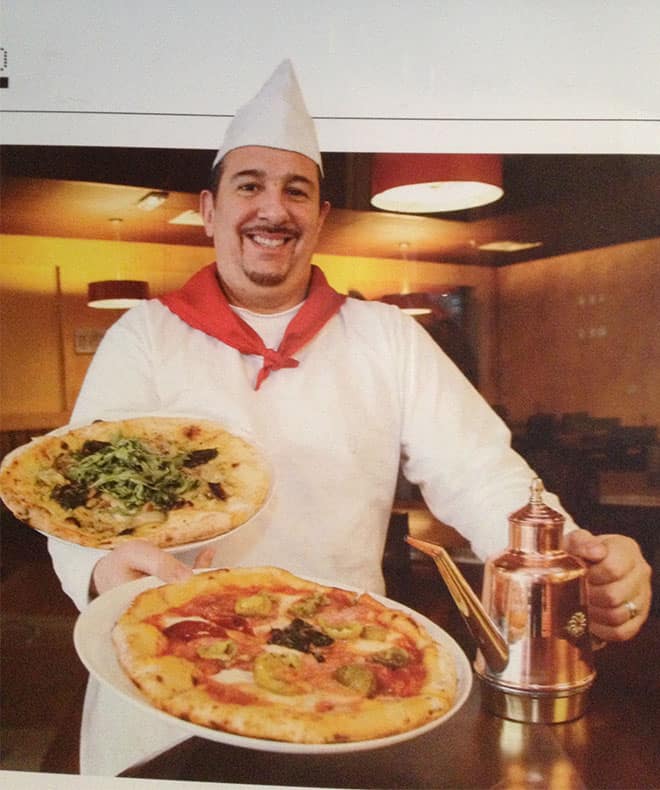 It wasn’t long before the kid would learn the art of cooking when his parents opened their restaurant on Singer Island. Chef Marc really had a passion to explore various types of cooking, and returned to New York to learn the art of preparing cuisine in it’s natural state. During his early years, he returned to Southern Florida and became a big hit there. Later, he moved to Las Vegas, where he’s had other restaurants, and is now expanding to Henderson with his newly created Pizzeria.

With that said, Parma Pastavino and Deli, his new restaurant, has just celebrated its 4th year and I just happened to be there with my associate Rossana Huang. Ms. Huang is a vegetarian and I too have stopped eating meat. That is why I chose to dine at Parma.

I learned about Parma when I stopped by their new pizza house, Pizzeria Napoletana Wood Fired at 5705 Centennial Center Bldg. I must say, it’s the best pizza I’ve ever tasted, where they use a wood fired oven and the finest Buffalo Mozzarella cheese and flour available, and that’s a fact. So, lets journey to Italy with Chef Marc. Beginning with the garlic bread, Parma uses French bread with just the right amount of garlic.

Along with the bread, you can’t do without the traditional soup of Italy, Pasta Fagiola. It is prepared with Italian white bean and pasta soup. Now comes the inspirational part of our dining journey. Yes, Diane our waitress served the organic beet salad. Whatever the dressing consists of, and I tasted some basil in it, it was delicious. I’m a firm believer in surprises.

Without any warning, the secret dish that was served, just astounded us. It was the Gnocchi with speck, organic peas, with parmesan cream sauce.

That indeed was the prize winning dish, a favorite at Parma. Our main course however, consisted of a Portobello Mushroom with four layer cheese on a bed of spinach, for Rossana. “I love it” were the words spoken by her. Ah, but I had the Wahoo special, which is a wonderful fish prepared in a tomato base, just for me, with some very wonderful spices. What’s not to like about this neighborhood restaurant and deli! It’s all you need to dine in or just buy your favorite cheese salami and all that goes along with those types of foods, not to mention the homemade pastas and sauces.

There Is Always Room For Dessert Or …

Like all good people with appetites, we know there’s always room for desserts, especially homemade desserts. And I do mean that in the plural sense! Nadia makes the Tiramisu, Dada makes the cakes and Diane makes the Cannolis. We had all three and they were just what we expected from a fine bakery chef. The Tiramisu is layered cake made with savoiardi biscuits, which are soaked in coffee. Pastry chefs usually use a sweet mixture of mascarpone cheese mixed with eggs and sugar. Who really knows what other ingredients Chef Marc has added to his own recipe for this favorite dish, but it was wonderful.

Parma Pastavino and Deli is open from 10am to 10pm Monday-Saturday and 11-8pm on Sunday. The website is Parmabychefmarc.com and you can see the catering menu there. Call Marc or his brothers Don and Mike for reservations at [702] 2336272.