Storytellers United: The New Face of LGBTQ Youth in Entertainment, held a Pink carpet event on October 27th, 2016, in Hollywood, California. The night, put on by Dumont Marketing – producer of The HollyShorts Film Festival, was a smashing success, filled with celebrities, guests, music, and more.

Storytellers United is an award-winning collective of storytellers, educators, and thought leaders. For this night, Storytellers United organized a special think tank and social reception to promote equal representation for people of all backgrounds in media content, and to celebrate the launch of Adi TV Studio’s new USA series Eyewitness. 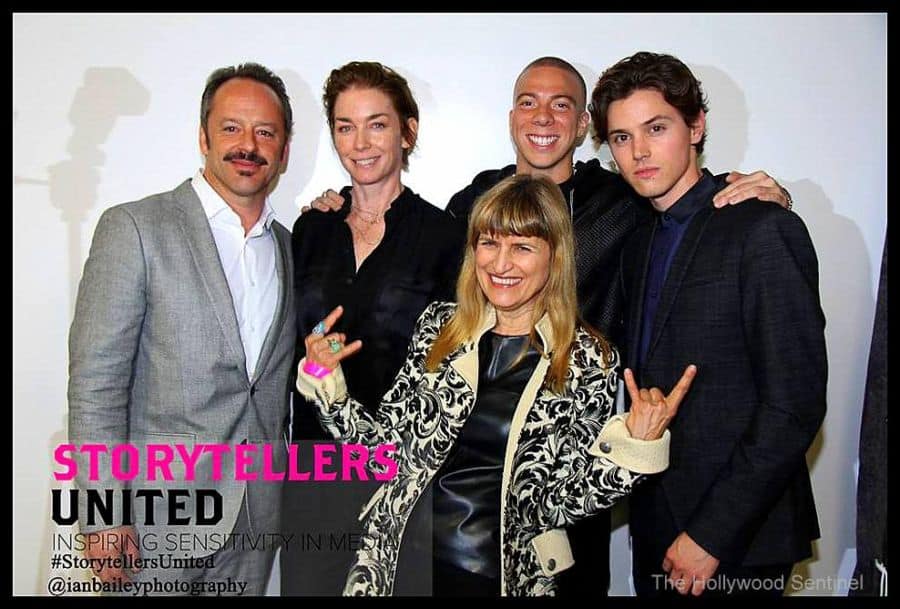 The event was held at a space called Neuehouse Hollywood, a private community of leading entrepreneurs and creative teams located in the former CBS Broadcast Building at Columbia Square. Instead of a red carpet, the ‘Pink’ carpet and celebrity arrivals began at 6:30pm, on Thursday, October 27th.

After enjoying complimentary free parking (a rare thing in Hollywood)! guests walked down the entrance on Hollywood Boulevard to the party. VIPs and celebrities walked on to the busy red carpet, where dozens of paparazzi were photographing and filming the arrivals for hours. All then entered the upscale premises of Neuehouse, which featured two cash bars, a large upstairs balcony seating area, a lobby, an indoor mingling area, two photo booths on mini red carpets for guests to record their memories, plush sofas, and a large auditorium style seating area with a large stage, in the massive concert venue type hall. Made of industrial style concrete on the tall inside walls, Neuehouse has a very nice sound and lighting system, and is a really nice venue.

Acoustical challenges exist when guests are in the upper lounge and bar area, as the voices magnify and echo out in to the rest of the theater. Distracted speakers and hosts here had to frequently stop and make announcements for the lounge area guests to lower their voices during the lectures. Incredibly, the guests kept loudly talking, at which one of the hosts finally got more stern, “Listen people in the back! You really need to be quiet!” Finally, they complied.

The biggest takeaway of the evening was from one of the nights panelists, “Twilight” director Catherine Hardwicke. Hardwicke, pictured above at the event flashing a two handed set of “devil horns,” referred to “Twilight” stars Robert Pattinson (now 30) and Kristen Stuart (now 26) as “technically” straight, getting laughs from the audience, implying that she thought they were both bisexual. While we know that Kristen Stuart has stated such -dating women, the rumors that Robert Pattinson is also gay – are false.

Catherine Hardwicke Has Teen Stars Rehearse at Her Home and Strip

Even more wildly shocking for a top Hollywood director to reveal, was Catherine Hardwicke’s confession in front of this audience of hundreds in Hollywood, that she got great pleasure in making the two young “Twilight” stars come over to her home to “rehearse,” and “make out” in her bed. Robert Pattinson, then just 22 years old, and and Kristen Stuart – then just a barely legal 18 years of age, were in “Twilight” director Catherine Hardwicke’s bed, during her gleeful debauchery – according to the 61 year old director. It was here in her bed, Hardwicke confessed to all of us in the audience here, that she made the young stars – Robert Pattinson and Kristen Stuart “strip down to their underwear” and “make out,” which the director confessed got her “really excited!”

After Catherine Hardwicke’s voyeur confessions, guests listened to more speakers, and saw clips of some of the panelists’ work. Guests were very impressed and pleased with the quality and production performance of the event, which was a special night here in Hollywood.

This content is copyright, 2016, The Hollywood Sentinel, all rights reserved.