The Fantastic Mr. Fox succeeds because George Clooney brings an effortless je ne sais quoi* to his savvy vocal portrayal of Mr. Fox. Based on a 1970 animated book by Ronald Dahl, Mr. Fox is the animal world’s Robin Hood, James Bond, and Ward Cleaver all rolled into one. Meryl Streep, as Mrs. Fox, sounds lithe and sexy. The movie begins with a Bonnie and Clyde routine where Mr. and Mrs. Fox jump fences and raid a chicken coop, only to be trapped in a cage on the way out of the structure. Mr. Fox incorrectly guesses that the trap is spring-loaded, causing it to land on both of them. His wife chooses that moment to tell him that she is expecting. She extracts a promise: that if they escape their near-certain death this time, he will find a safer way of making a living. 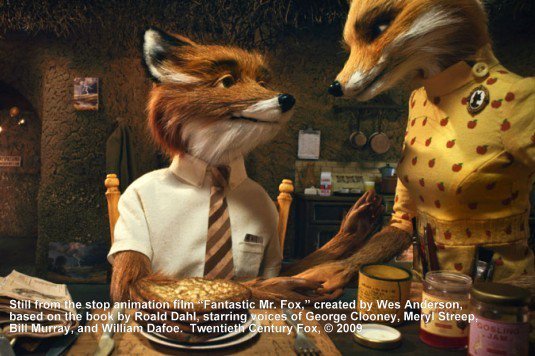 We flash forward to years later, Mr. Fox is newspaper columnist with a young son. One day he tells his wife, “I don’t want to live in a hole anymore,” and begins searching for real estate in the loftier “tree” market. Against his lawyer’s advice (side note- his lawyer is a real badger) he buys the tree. Out his front window, the three meanest farmers in the region; Boggis, Bunce and Bean. It isn’t long before Mr. Fox decides to do “one last job.” That’s the beginning of his fall from grace…and last shot at redemption?

This film that leaves audiences smiling, their hearts a little warmer, and more sympathetic to the animal instinct in all of us that sometimes makes us want to do things we said we wouldn’t. This is a film for children and adults, bringing back the warm feel of hand-crafted, stop-frame animation in a nascent backlash against the coldly geometrical, high fructose, big CG blockbusters. Kudos to Director Wes Anderson and co-producers at 20th Century Fox, Regency Enterprises and Indian Paintbrush.

*French, an indefinable, elusive quality, esp. a pleasing one