A new leader of the rapidly growing ranks of female abstract artists in Southern California, the award winning fine artist Guadulesa has launched her new website this week, dedicated to her fans and showcasing her award winning art.

Guadulesa has become known for abstract or loosely figurative works of art, which reflect spontaneity, strong rhythm, texture, and color blends. The visual artist is a Boston native and former resident of the Piano Factory. After studying, she began her art career in Los Angeles, California, where she began to exhibit her work and painted sets for the theatre, television and the film industry. Exhibitions at Ligoa Duncan Gallery in New York City led to her work being sent to Paris in 1981, where she won the prestigious Le Prix de Peinture du Centenaire de Raymond Duncan at L’Academie des Duncan.

Guadulesa’s work is also included in the Massachusetts collections of the Black Indian Inn, the Harriet Tubman Gallery, and The Cambridge Lawyers Guild. Further of her works are also be found in private collections throughout the United States, including Puerto Rico and St. Croix, as well as Israel and Spain. From 1986 through 2003, Guadulesa was an active member of the arts community in Boston, where she headed arts programming at United South End Settlements. She is excited about expanding her work to the public with her new site, which is created to engage the viewers in her work, along with regular updates of her projects on the sites blog.

In 1991, Guadulesa received a Drylongso Award from Community Change, Inc., and in 1992, Guadulesa was the recipient of an Individual Project Grant by the Massachusetts Cultural Council, a state agency funded by the National Endowment for the Arts. She was appointed to the Boston Cultural Council by Mayor Thomas M. Menino and served in that capacity for six years. 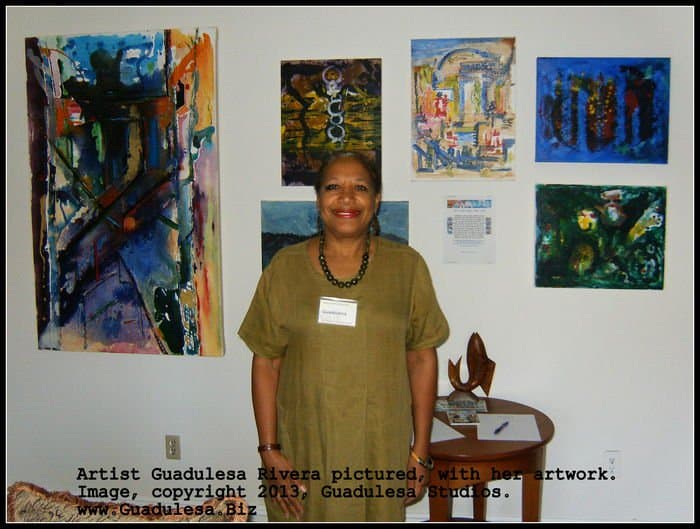 Guadulesa Rivera states: I refer to a book written by Dhyani Ywahoo, Voices of Our Ancestors: Cherokee Teachings from the Wisdom Fire, published by Shambhala in 1987 (in the art book she is creating).

Guadulesa Rivera: No. There is a difference between ‘spirits’ and spiritual awareness. I believe in the various sheaths of the being. I do believe in a spiritual force which manifests in a progressively solid manner. However, on the subject of healing, I believe that someone, who believes in the ability to heal, may heal faster than someone who does not believe. Even if they take the same medications. The power of the mind is quite influential.

Guadulesa Rivera: As a people, we believe in a positive path one that acknowledges the beauty all around us. We strive to encourage the good in all, not just for ourselves, but for all life on the planet.

Since this interview above, the Kickstarter project of Matrix 5, Tones of Resonance has now been funded.

Guadulesa Rivera: I feel so fortunate to have the support of family and friends. They have witnessed my struggles and triumphs, and have hung in there with me. To have the backing of folks who have some knowledge of the project and want to make sure that this wisdom has greater access to the public is truly exciting for me. The successful backing of Matrix 5 encourages me to share the wisdom.

Guadulea Rivera: I am working very hard to have the book ready by the end of November.

For commission works or purchases of existing inventory, contact the studio of the artist at the website, or e-mail: [email protected]