Once upon a time in the land of celebrity there existed a star that shone brightly like an exploding nova, and then he was gone. He left behind a trail of stardust that still glitters in the eyes of his faithful fans … I was privileged to meet this super star and to share in some of the fun of his summer engagement at Lake Tahoe, California.

It was a summer I will always treasure … And now, as I get a bit older, there’s a twinkle in my eye whenever I remember the night I met the king of Rock & roll … the following is a recollection of that unforgettable meeting.

It was the summer of 1972, when Col. Tom Parker brought the Elvis Presley performing entourage to Lake Tahoe California. At the time, I was working, along with some of my friends, at Harrah’s lake Tahoe casino. We’d gotten ourselves summer jobs up at the lake, in hopes of bringing a little excitement into our lives. With the Elvis Summer Festival rolling into town, we had no idea just how exciting things were going to get.

Huge red neon letters glared out, “ELVIS, ELVIS, ELVIS” lighting up the top of the big casino-and adding a glow to Lake Tahoe’s skyline. On the tall Sahara marquee, 24 hours a day, an incessant, rotating stream of white lights spelled out Elvis’ name over and over. 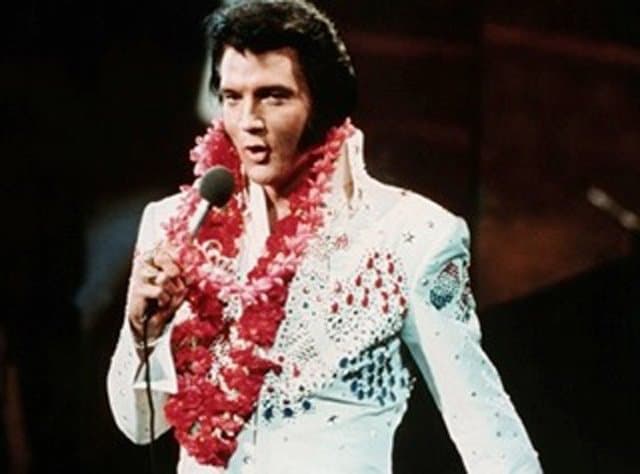 Elvis’ pals and musicians came into the club where I worked. They made it a habit, every night, after their show. They were easy to spot; most of them wore a large piece of gold jewelry inscribed with “TCB” on top of a golden lightning bolt. The 24-karat gold pieces were gifts from their boss- a reminder for them to “Take Care of Business.” At least that’s the explanation that is commonly given.

While working in the casinos, I became acquainted with some of Elvis’ pals, guitarist Charlie Hodge, musical arranger and keyboard man Glen Hardin, and Elvis’s high school buddy and bodyguard Red West( who later wrote that tell all book about his boss). Red personally invited me to see a couple of the shows and to attend one of Elvis’ after-show parties.

Elvis’ performances were all sold out. Breathless women waited nightly to get into the performance, forming a snake line twisting through the casino. That night, after watching Elvis’ electrifying late-show performance, I took the elevator to the star suite on the top floor of the casino where the entire floor was reserved for the King and his royal entourage. An Iron Gate and an armed guard separated Elvis from the rest of the world. I gave my name to the guard and told him I was expected. A moment later, Red was called out to greet me.

Knowing I was but moments away from meeting the King, my knees began to shake and my hands began to tremble. By the time I walked through the doorway of the suite, I was shaking all over. When I entered the room, the first person I saw was Presley himself, sitting in a large, ornately carved and cushioned chair surrounded by crimson red cushions. Red walked me over to “the king” and introduced me. “Elvis, meet Cookie. Cookie, meet Elvis.”

Elvis remained seated in his big, comfortable chair; not exactly the act of a country gentleman-more like an actual king meeting one of his loyal subjects.

I wasn’t very impressed with his manners, until he took my hand and tenderly kissed it hello with his incredible charisma and boyish charm , I knew in a moment that I could forgive this guy anything..

“How ya doin’, hon?” Elvis asked me, with a sexy drawl. Elvis called all the ladies “hon” or “darlin’.” I doubt very much if he even tried to remember all our names.

I was mumbling an answer to Elvis’ half-hearted question when he pointed to a nearby crowded couch and invited me to “sit down and stay awhile.” I quickly took the last available seat, next to Elvis’ dad, Vernon Presley. That night, Elvis was wearing a tight-fitting black jumpsuit that showed off a perfect physique. A bright red silk scarf hung loosely around his neck; the color contrast was dazzling against his porcelain white complexion. Elvis’ dyed jet-black hair glistened under the overhead lamps, and his hazel eyes were clear and magnetic. Even up close, Elvis looked perfectly fabulous. This was 1972, and the king of Rock & Roll was at his peak in looks and talent. Most of that night, Elvis sat in his armchair sharing funny road stories with his pals and laughing at inside jokes with the “boys.”

A group of attractive young women – airline attendants – encouraged him to continue his storytelling. I was offered the choice of sitting at Elvis’ feet along with the girls or remaining on the couch. I chose the couch. At age 28, I felt more comfortable sitting with the senior Presley, rather than the group of giggling young fans.

Room service brought up a continuous supply of Blue Nun white wine called Liebfraumilch. Elvis and his boys referred to this favorite wine as “Lip frog milk.” Along with the wine, trays of cold cuts and fried shrimp were constantly served. Elvis, who was very lean at this time, ate very little and drank an occasional orange juice. He gripped an empty white cigarette holder between his teeth, referring to it as his “pacifier.”

Meanwhile, back on the sofa, the senior Mr. Presley amused the older crowd by relating his favorite fish stories from trips back home on the lakes and ponds of Tennessee. Vernon Presley seemed a quiet man with simple tastes, and I got the distinct impression he felt a little out of place amid the clamor and glamour his son evoked. Not that he wasn’t enjoying the attention he received from the ladies-far from it. Just like his son, the elder Mr. Presley had an eye for the ladies.

In the wee hours of the morning, Elvis suddenly sprung to his feet and startled us all by challenging one of his pals, Sonny West, to a playful karate demonstration. (Elvis had picked up the interest in martial arts during his Army stint in Germany.)

We ducked for cover as Elvis shook up the party with his high kicks, spins and karate blows, knocking over tables, chairs and anything else that got in his way. I watched from a safe distance as Elvis and his sparring partner exchanged fake blows and eventually wore themselves out. The match was obviously a draw, but Sonny, playing to his boss’ ego, proclaimed Elvis the winner. 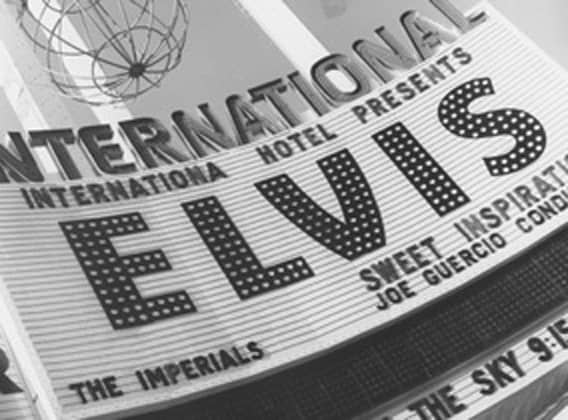 Later, Hodge showed some of us the special room reserved for only Elvis’ bejeweled stage wardrobe. The jumpsuits he wore each night during his act were cleaned after every show, neatly encased in clear plastic and returned to the racks. I couldn’t resist the urge to hold one of Elvis’ gaudy suits in my hands, if only for a minute. I raised one from the rack and held it up to me in front of a mirror, but, owing to its extreme weight, I quickly returned it to the hanger. Holding the ornate costume, even for a minute, gave me a new appreciation of how Elvis must have felt wearing it every night for hours under those hot stage lights.

It was getting to be early morning now, and the sun had begun to rise over the Sierra Nevada. The view of the lake from Elvis’ living room balcony was spectacular. Party-goers, including Elvis, were mesmerized by the morning sun’s reflection over beautiful Lake Tahoe.

The party was finally breaking up when Elvis called for one of his boys to bring him “the usual.” I noticed Elvis hadn’t been drinking all night, so I was curious to see what “the usual” was.

A minute later, Elvis’ assistant handed him a black valise and a glass of water. Elvis opened the mysterious looking case, and to my surprise it was filled to the brim with an assortment of stomach antacids. I watched as Elvis chose one, a double Alka-Seltzer, and offered his guests the same from the valise. I took a packet from the case, and bringing my most memorable evening to a close, I plopped the effervescent wafers into a tall glass of water. Before bidding the great singing star goodbye, I joined him in a bubbly antacid that put the cap on a night I will never forget.