Susan Boyle is an over-night sensation; that’s surely a miracle, but she has an incredible voice and deserves it. For some odd reason, this brought back to mind when The Beatle George Harrison discovered Ravi Shankar (at least for the Youth Culture) in 1966, and became a student of the sitar to this Master. This brought Indian music to the West and the youth of the world began to listen to Ravi Shankar with keen interest. “We were talking-about the space between us all, and the people-who hide themselves behind wall of illusion.” 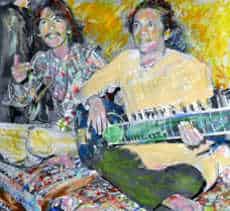 George had first used the sitar on “Norwegian Wood” featured on Rubber Soul and then again on “Love You To” on the experimental LP Revolver. David Crosby of the Byrds told George about Ravi and George bought one of his albums. This instigated a radical change in rock music and created a lifelong friendship between George and Ravi. An important lesson was learned by George when the phone rang one day and he stepped lightly over the sitar to answer the phone. Ravi admonished him to show respect for the instrument, because it is a conduit to the Goddess Saravati. Music is a part of God, in the Indian way of thinking. I believe George learned his lesson well from this and remained respectful towards the sitar thereafter.

By the way, there were a few other trifles for jotting down these random notes regarding Ravi and George. I saw on BeatleNews that George Harrison was being honored with a Star on the Hollywood Walk of Fame. Most spectacular of all, it was Ravi’s 89th birthday on April 7th. I own the 4 CD set Ravi-In Celebration, which came out in 1995, and was co-produced by George. I have been playing it constantly this past week. The sitar music is pleasant background (Extra Texture) for when you are doing some serious reading or even writing, for that matter. You find yourself focusing much more clearly when this music is playing.

There are a couple of other reasons why I am tuning in on this beautiful Indian music. The recent success of Slumdog Millionaire is one, and another is that I communicate with lots of Indians at my job. To top that off, I want to travel to India, and so a good friend of mine has told me of her many journeys to India and of exotic markets, bright colors, delicious food, beautiful art, and the mystifying music. I have a wonderful Cartographia map which I study day and night. I’m checking out Calcutta now, where Ravi Shankar grew up. The feather in the hat is that this is a little warm up slice for my epical coverage of All Things Must Pass.

A fond recollection of mine is the Dark Horse Tour of George Harrison, that featured Ravi Shankar; I went to the November 22nd, 1974 show at Tarrant County Convention Center in Fort Worth. My memory is a little faded, but this is the only time I ever saw a Beatle. The Indian musicians were wonderful and I can still recall the pungent aroma that permeated the concert hall. There is good documentation for the Dark Horse Tour on the internet, so check it out!

The best song for me from the tour is “I Am Missing You”; the studio version is on my box set. It includes the rock musicians Jim Keltner, Ringo Starr, Billy Preston, Klaus Voorman, and the Indian vocalists Lakshmi Shankar, Viji Shankar, and Kamala Chakravarty. George himself is on acoustic guitars and autoharp. This song was the finale of the show and, for me, shows a splendid coming together of the East and West, a sort of Indian “Hey Jude”!

The In Celebration Box Set has a complete biography of Ravi Shankar, which I am studying carefully. Pick up one of Ravi’s CDs, like Ravi Shankar’s Music Festival From India (produced by George Harrison) and experience firsthand this transformational music. Happy birthday Ravi and God Bless your Shining Star George! Susan Boyle herself should take a bow to your brilliance!