The IndyFilm Co-op is presenting the 2nd Annual B-Movie Celebration, held in Franklin, Indiana on September 26-28. The event is in held in honor of celebrating the B Movie classics such as Forbidden World, Death Race 2000, Night of the Living Dead, Night of the Comet, War of the Worlds, and many more as well as world premiere of what is sure to be instant B Movie Classics.

Our very own Judyth Piazza, host The American Perspective on WTTB NewsTalk radio has landed a role in the big screen sci-fi thriller, Blood Moon. The film, which will make its world premiere at the B Movie Celebration, is about a young woman, Annie Jacobs who attempts to escape her past by immigrating to the moon colony of Ganymede – but only to have her past catch up with her. 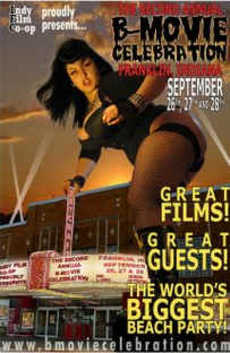 Besides screenings, the Convention will also hold a panel discussion over the future of the Internet as well as the affects it has on filmmakers. Bill Dever, who directed Blood Moon, along side International Film and Television Alliance Chairman Lloyd Kaufman as well as academics and industry professionals which will be announced at a later date are expecting a large audience to be in attendance.

“We feel that it is imperative during this panel to get viewpoints from filmmakers, ISP’s (Internet Service Providers), and legislators,” said Bill Dever.

The Celebration will be a special occasion as well as a retrospective of the work of Jim Wynorski (Demolition High, 976-Evil II), and a Lifetime Achievement Award presented to Stuart Gordon. Widely known for 1985’s Re-Animated, he has been named by B-movie fans as one of the most prolific directors of the exploitation genre over the last 30 years.

You can find more information at www.bmoviecelebration.com or send an email at [email protected]