Unfolding like a poor imitation of a Mathieu Kassovitz-directed action thriller, Babylon A.D. plays out, or rather fizzles out, as if director Mathieu Kassovitz simply lost interest in his own movie somewhere along the way. Barely based on French novelist Maurice G. Dantec’s Babylon Babies – which had a whole lot more to do with the political implications of bio-technology along with the disintegration of the former USSR superpower into futuristic madness and anarchy – Babylon A.D. drops notions of drama or deep thought for underdeveloped, colliding narrative threads that are nearly as chaotic as the social landscapes in question.

A scowling, mumbling Vin Diesel as ho-hum multinational mercenary Toorop, arrives on the New Serbia scene with ultra-bad loner attitude, as if he’d just finished hanging out on a Brooklyn street corner. Toorop is entrusted by portly mastermind Gorsky (Gerard Depardieu), with a mysterious mission to deliver convent cutie Aurora (Melanie Thierry), along with her kickbutt chaperone Sister Rebeka (Michelle Yeoh), to the Big Apple by way of some cross-continental frozen northern tundras. 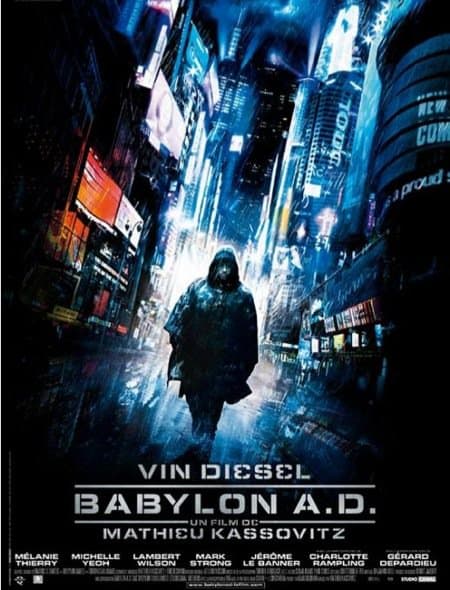 More travelogue and hi-tech tall tale than terror ride, Babylon A.D. does dazzle on occasion with its apocalyptically minded explosive action sequences. But they seem at times to be out of synch, as if assembled by a dyslexic editing crew.

Then there’s the matter of the enigmatic Aurora with all sorts of suspicious superpowers, including those associated with virginal fertility, whom a devious high priestess religious nut played by Charlotte Rampling schemes to snatch. Though Toorop’s highly efficient but basically could care less outlook on life is pretty contagious, and makes it all hardly seem to matter. So when Diesel lets on that he doesn’t like to get involved, you can’t be sure if he’s talking about his on screen clientele, or this movie.

While we’re on the subject, here’s a prophesy. Babylon A.D.’s future destination is Babylon DVD, predictably much sooner than later.