While many of today’s motion pictures end on a sad note, or don’t convey a morality in alignment with a life that actually keeps one alive – and instead, shows criminals or murderers getting away with bad deeds – not showing the effect of a life of crime or dishonesty, there is a handful of actors and producers today who are concerned with the way Hollywood impacts society, and more particularly – young people.

These few entertainers and entertainment executives are actually doing something positive with their power – to use Hollywood as a tool for good – to convey to the world specific messages of love, hope, spiritual discovery, and success. Lee Burns is one such rare man.

Lee Burns was born in Germany, to Army draftee Gary Burns and his wife Toni Wilson. Raised in and around Ft. Worth, Texas, Lee grew up in a very strict religious environment that forbade movie-going. In fact, Lee’s first movie theater experience wasn’t until he was fourteen years old, when his cousin snuck him out for a viewing of ‘Dream a Little Dream,’ starring Corey Haim and Corey Feldman. Although mesmerized by the experience, Hollywood was still a dream too foreign for Lee to even imagine. 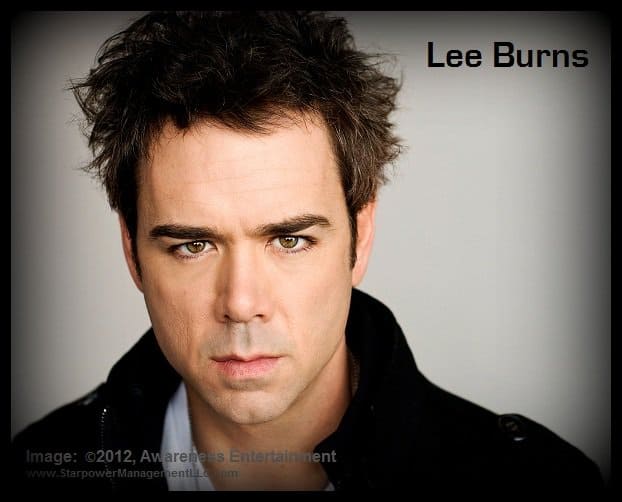 After graduating high school, and a short stint in community college, Lee embarked on a career as a professional firefighter and paramedic. In his first year, Lee was voted “Rookie of the Year” and broke the time trial record on the tower obstacle-testing course.

Lee’s first foray into the entertainment industry came when he was looking for part-time work around his schedule as a professional firefighter and paramedic. David John Huber, of Fashion Theater Dallas, saw a spark in Lee and agreed to represent him as a model, under one condition – that Lee try acting. It didn’t take long for Lee to realize that David was right and Lee fell in love with acting.

From Model To Actor

Following several National modeling campaigns, including Six Alarm Jockey, for Jockey underwear, (one of the most successful campaigns in Jockey’s history), which ignited a two-year nationwide appearance and autographing tour and repeated coverage by Entertainment Tonight, Extra, CNN, etc., Lee decided to dedicate himself to acting. In just two and a half years Lee became one of the most sought after actors in Texas with roles in six independent films, (four of which were starring roles), a recurring role on ‘Walker, Texas Ranger,’ and two leads in movies of the week for Paramount and VH1; the first, ‘The Way She Moves,’ opposite Anna Beth Gish and the second, ‘Warning: Parental Advisory,’ opposite Jason Priestly and Mariel Hemingway. This is where Lee first worked for director Mark Waters, who immediately recognized Lee’s talent, saying, “This role represents a thimble full of the talent [Lee] possesses. It’s beneath [him] but it’s the best I had to offer.”

After leaving the firefighting industry for good, and moving to Hollywood to pursue his new passion, Lee worked with Mark on two more films; ‘Freaky Friday,’ opposite Jamie Lee Curtis, and ‘Just Like Heaven,’ opposite Oscar Winner Reese Witherspoon and Mark Ruffalo. Mark Waters recognizes Lee as a true chameleon actor, saying, “When he walked into the room, he had transformed himself so completely, I literally did not recognize him,” adding, “Lee definitely has the whole package, the sky is the limit for him. I hope to find roles for him in all of my movies.”

Lee Burns has since appeared in films and television shows for Paramount, Walt Disney, Universal, DreamWorks, NBC, CBS, Hallmark, Jerry Bruckheimer Productions, Warner Brothers, FOX and TNT, (many of them repeatedly), as well as starring in several independent films and a television pilot. One indie film includes the gritty hit ‘Clean,’ which garnered eleven awards on the festival circuit, including six best picture awards.

Lee Burns has also enjoyed his work opposite many more of today’s top stars including Oscar Winner Gary Sinise, Brook Shields, David Carradine, Scott Glenn, Lou Diamond Phillips, and the legendary Chuck Norris, to name but a few. Lee has also had extensive experience behind the camera as well; in the art department, as both a carpenter and set dresser, as a grip, a gaffer, and even in transportation on numerous film, television and commercial projects, leading him to have a unique respect for all of those he works with when he is an actor, director, or producer on set.

In 2009 Lee took his passion for the entertainment business and storytelling to the next level and formed a production company called Awareness Entertainment, for the purpose of producing and distributing financially successful films and television projects which raise the awareness of the audience through stories that entertain, educate, enlighten, and promote successful living. Lee Burn’s vision and path is truly unique and noble considering the often bleak and immoral world projected through the lens of much of Hollywood. To view some of the work of Lee Burns, visit one of his reels in the link here below at the bottom of this page.

Starpower Management LLC CEO Bruce Edwin states, ‘Lee Burns is an outstanding actor, with a great look for diverse roles. In addition to that, he is an enlightened human being doing his part to make the world a better place, and we share that goal in common which is very refreshing – to work with someone on that level. We are very pleased to represent Lee across the board, and are very excited about the great things that we both intend to make happen in the years ahead.’

For booking or interview requests of Lee Burns, contact Starpower Management LLC at 310-226-7176.

To view some of the work of Lee Burns: