Dickie Sinfield, the 52-year old Salk Lake City journalist, ignored the call of her ‘cowgirl instincts’ for years in order to mix up in the more delicate and nifty urban lifestyle. But now, when her only brother is dead in suspicious circumstances, Dickie has little choice but to return to the ranch in Clayton, Utah, where she spent a childhood full of internal psychological conflict.

The storyline of Jana Richman’s latest novel The Last Cowgirl (William Morrow Books, January 2008) points to the strong sense of connectedness to a place – in Dickie’s case, the country farmhouse where she had her first practical lessons in living a life. 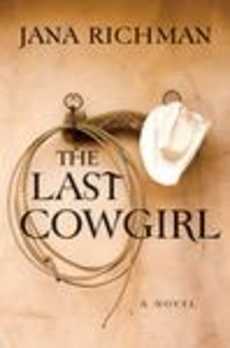 The story of The Last Cowgirl proceeds as a first-person narrative, taking turns between Dickie’s voice as the 52-year old reporter in Salt Lake City and the child Dickie growing up on a farm. Unlike her elder sister Annie, Dickie’s characterization follows the view of her mother: ‘playing it safe is a shitty way to live a life.’

This holds for both the girl child on the ranch who would get lost in the hills at night and rescued by the ranchers as well as for the still-single, investigative reporter who would go politically incorrect in the face of crooked authorities. Strength, courage, stamina, and the spirit of adventure speak it for the west; Dickie Sinfield being an instance.

Jana Richman’s novel is a balanced work of inspiring literary merit. The language is fresh; the conversations are engaging; and all the main characters are memorably created. In a sense, The Last Cowgirl is a book of heroes chosen from apparently common people.

Dickie’s conflict is both natural and vital for the expression of her real self – one that has escaped the lash of time by her half-conscious choice of shifting places. The motivation for returning to Clayton is gradually explored in the combination of the two subplots that fit into each other like mirror images to make a single, shining whole. Readers are cogently led to show how Dickie’s life is about keeping the legacy of courage and commitment that has been the pride of living in the openness of the American west.

The Last Cowgirl also critically brings up some burning issues, e.g. care for animals versus their abuse for vested-interests; passion for natural versus artificial life; speaking the disturbing truth about war as against a conciliatory silence; and finding the true love in contrast to mere companionship for the sake of a social life. With absorbing dialogues, captivating imagery, and delightful humor Jana Richman has scribed a heart-winning saga of exquisite western beauty.