Joanne Drayton successfully introduces us to the reclusive Ngaio Marsh, her extraordinary success, and her love for the theatre, the arts, her friends and the country she loved and would always call home.

Ngaio Marsh was still at school in New Zealand when, in the summer of 1912, her parents and a group of friends travelled via train from Christchurch to Oxford where they had lunch at a pub, then ambled with two horse-drawn farm carts to find a campsite at Glentui. They slept by the river and Ngaio woke to the ecstatic joy of discovering the splendour of native birds celebrating the arrival of the dawn in such a beautiful location. 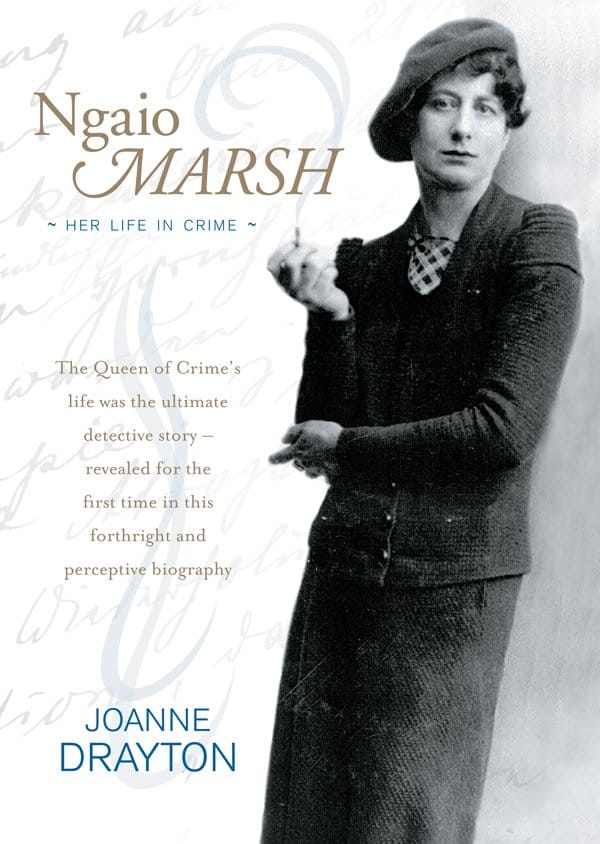 This was her country, the land of her birth, and it drew her back again and again regardless of the phenomenal acclaim she received, particularly in the UK and the United States. Ngaio Marsh, a crime novelist, was a worldwide literary sensation. In 1949, in conjunction with Penguin Books, Collins released ten of her novels simultaneously. One million copies came onto the international market, a distinction only shared by George Bernard Shaw, H.G. Wells and Agatha Christie. On the 11th of June 1966, she was made a Dame Commander of the British Empire.

Marsh was also a hugely successful director of theatrical productions for over 30 years. At 77 she directed Henry V at the new James Hay Theatre in Christchurch. Bruce Mason, attending as a reviewer for The Listener, wrote to Ngaio and said that he was lost in admiration of much of it. To those who knew her, particularly within theatrical circles, she was a loving and extremely generous woman.

Dr Joanna Drayton has produced a subtle yet exquisite portrait of this extraordinary woman. Her descriptions of Ngaio the fashionable personality in Knightsbridge are as evocative as those of Ngaio the young artist holding exhibitions in an upstairs room with no door other than a rickety fire escape, or Ngaio the girl sleeping outside at her parents under the stars. Drayton effortlessly weaves together the development of Ngaio’s novels and characters with her theatrical work, her friendships and her upbringing. She reveals the personality of this global celebrity as well as her achievements. It is more a homage than a biography, and rightly so. This book places Marsh firmly at the forefront of New Zealand’s creative endeavours.