Being a self-published (or Indie Published) author myself, I felt it only fitting that I review another Indie author’s book. This story is a free download from Zoe’s site or you can get the kindle version from Amazon for only 80 cents. Following is a short blurb from Zoe’s own writing blog on Kept: 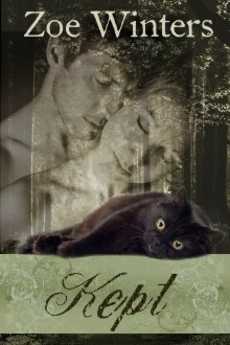 Greta is a werecat whose tribe plans to sacrifice her during the next full moon. Her only hope for survival is Dayne, a sorcerer who once massacred most of the tribe. What’s that thing they say about the enemy of your enemy?

Kept is a paranormal romance novella. Those of you that read my previous article on self-publishing, know that a novella ranges from over 10,000 words to less than 50,000 by my estimation. Kept is a little over 20,000 words, so it’s on the shorter side of that scale. It’s not only short but a very quick read. That of course is attributed to the wonderful way that Zoe writes. Her story flows, and I wanted to keep reading well past the ending of this story. That is not to say that it is without flaws.

Kept starts with Greta working at a bookstore, when one of the local vampires walks in. Greta is a werecat, which means she is half human and half cat, and can shift between the two. Greta obviously fears Anthony, and the reader surely is left with the idea that he might play an important role in the story. He is quickly forgotten though, as she is faced with a far bigger problem. Apparently, she had more power than even she realized and her tribe plans to sacrifice her during the next full moon. Her mother tells her to seek shelter with the local sorcerer, Dayne.

Both Dayne and Greta are likable as the lead characters in this story. It is a romance, so you know they will become involved. The motivation behind this coupling is handled in a very imaginative and cute way. The majority of the story takes place in Dayne’s home with the two of them trying but failing to keep their hands off the other.

Of course Greta stupidly escapes the safety of Dayne’s home just before the full moon, so of course her tribe captures her. They of course begin the ritual to sacrifice her, and the reader wonders how Dayne will save her. The ending is the only part of the story that felt forced to me. It seemed that Ms. Winters wanted to end her story quickly, so she did just that. Anthony from the beginning of the story magically reappears, does his part to save her and then just as quickly disappears into the night. The novella could, and I feel should, have been a novel, if Zoe had explored the vampires she brings up in the very first page, instead of just briefly having them run through a few scenes.

I enjoyed reading about the werecats though and how powerful they are. I looked forward to seeing how powerful Greta would become (unfortunately, the story ends before we find out). Apparently, her blood is very powerful. Even online websites sell her species’ (also called Therian) blood. Dayne visits such a website early on, and I couldn’t help but see if it existed. I was pleased to see that it does: www.theriantype.com. A lot of effort went into creating and maintaining this site. Hopefully Zoe puts such effort into the next book in this series, which I look forward to reading.

Overall, Kept is a great book to read when you have a few hours to spare and want to escape into a paranormal romance. I think Zoe Winters has a promising future with her writing (and publishing) career.