“I don’t believe in ghosts but they have been chasing me my whole life.” -Edgar Allen Poe

Crack journalist both in and out of the comic book world, the heroine of the other-worldly series, “Reluctant Ghost Hunter,” is SOP’s own Judyth Piazza. To her more than 500 SOP family members, it is spooky to imagine; but, as the Reluctant Ghost Hunter, she experiences the struggle of a serious journalist longing to cover issues of community importance.

“Part of my inspiration for this series comes from an old TV show from 1974 called Kolchak “The Night Stalker” which is about a journalist who believes in the paranormal and writes stories that, in the end, always get censored and the paranormal is hidden. However, my character is the exact opposite.” Piazza says. 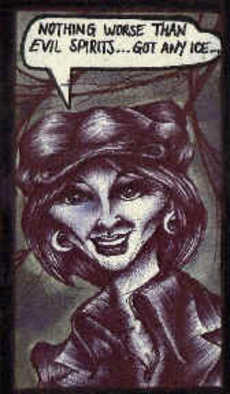 Nevertheless, Ghost Hunter Judyth is forced to deal with an all-boy’s club mentality and is continuously assigned off-the-wall tabloid stories which she reluctantly accepts. Fortunately, our never-say-die journalist discovers adventure along the way; and, with the help of artist and illustrator Glenn James, we get to go along for a ride that rivals any adventure that agent’s Mulder and Scully or the premiere girly ghost hunter, Nancy Drew, could have ever faced.

Mr. James said, “I am really excited about this and it was a little unreal to hear Judy’s voice in real life asking me to assist her with this project.”

The first story will be illustrated by James and is based on the Bell Witch haunting of Adams, Tennessee.

In Real Life, Judyth Piazza has written many stories to entertain and inform. She began sprinkling sparks of the paranormal within her tales to spice things up, entwine local folklore and capture her reader’s attention. A dash of this and a wisp of that caused Judyth’s stories to be among the most read and reprinted in her collection. Lucky for us, the multi-talented Glenn James strolled into Judyth’s SOP and a great collaboration took on flesh and blood dimensions.

“The Reluctant Ghost Hunter” is floating its way through production and will materialize October 1, 2008. You need not fear. You will find your fix of delightful drama and suspense right where you want it to be- everywhere.

Keep watch at the SOP and you’ll join us in squeals of delight. Reluctant or not, this is one wild and crazy comic book series. Enjoy!

Check out some of Judyth Piazza’s other ghostly projects: