There is a trail of bodies, very dead bodies, in Odd Hours that reminds me of a cache of corpses littering the streets and shifty alleys of Dashiel Hammett’s Red Harvest. The evil characters in Odd Hours also reminded me of Hammett’s bad guys, maybe Lew Yard or Max Thaler. This is my first Dean Koontz book, but it is my understanding that in the other three Odd Thomas novels very little senseless violence is present.

While Dashiel Hammett mainly sticks to his guns of a stark realism, sickening street-graft and political corruption, Koontz intermingles the tangible world with a fantasy world that springs right out of his zesty imagination. He does this randomly and freely and thus he has created his own unique literary genre; just in jest I will call it ‘Spontaneous Fiction.’ 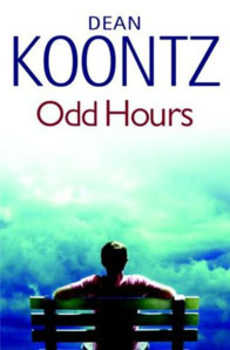 The plot itself is a thinly veiled Indian blanket for the assumption of an international coup of power by a rogue group, seeking to enact some dastardly totalitarian social- engineering to our vulnerable American society. The exact nature, or political views of this rogue-ish bunch of rotten apples is ill-defined, but resembles something akin to ‘Thunderball’s Revenge’ in Ian Fleming’s James Bond spy-thriller.

Odd meets up with Annamaria, a shaman-like lady who talks in riddles, and who can see ‘unknown things’ in the future. He also encounters many villains, of many varieties on the way, such as Hoss Shackett, a high level conspirator who also turns out to be the Sheriff of Magic Beach, which seems to be located on the coast of California somewhere.

One real strength to Odd Hours is the rich use of imagery; foremost, the fog and the pack of confounding coyotes come to mind. “The thick muffling fog was a time machine that rolled the night back more than one hundred years, silencing all the sounds of modern civilization-car engines, radios, the TV voices that often leaked from houses. The peaceful quiet of the nineteenth century coddled Magic Beach.”

The fog looms in every scene, as in John Carpenter’s film of the same name, and represents the ever present, shaky grip on stability *(where even the cops are criminals) that Odd encounters in Magic Beach. The fictitious town of Personville in Red Harvest is that way also, corruption is all around and creeps drop dead from bullets on every other pulp page.

Odd has to plug (off) quite a few villains himself on this woody paper, but none of these cats are really human; the fog functions nicely here, it’s a drapery of omnipresent evil that is a cloudy deterrent to any iota of goodness that might try to slither its way into Magic Beach.

The coyotes threaten Odd several times in the novel. The first time Annamaria is able to shoo them off with simple commands of talismanic authority. “You will leave now” did the trick for Annamaria, but didn’t work so well for Odd. These coyotes are flesh and blood critters and are not ghosts, as I had originally suspected. “Out of the mist, through their thickly furred and plume-tailed ranks, came one stronger than the others, with a proud chest ruff and a larger head than any in the pack.”

I see them as not really evil, but rather as a vehicle (by the author) to allow Odd to tap into a parallel universe, where symbols become tangible beings *(do not question this!). This is proof of my thesis that Koontz intermingles the material world of history with fantasy or a science fiction space that can be occasionally entered at will.

The point of view is a first person narrative account, with Odd Thomas telling his hair-raising tale. The tone he takes is humor and sarcasm; Koontz uses Odd’s mouth to espouse theories about human nature or to make light of his predicament of always getting snarled in jams with the most creepy, reptilian bad guys one could ever imagine.

.” ..we had arrived at one of those moments of extreme stress that I mentioned earlier, one of those awkward situations in which my imagination can be as ornate as a carousel of grotesque beasts, standing on end like a Ferris wheel, vigorously spinning off visions of ludicrous fates and droll deaths.” 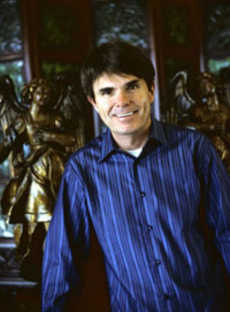 The story is told with the ‘gumshoe tradition’ (a little dash of Raymond Chandler) close at hand, and where danger (mainly lots of fog, but hideous homicide too) lurks around every corner. Think Fred McMurray in Double Indemnity with the sassy, hard-boiler narrative, where ‘the mud, the blood, and the beer’ coats his throat on every word, as he reveals how they will do-in Barbara Stanwyck’s husband, and get away with it too!

I’m not going to bang this book to death, but Odd Hours was an enjoyable read for me. I believe it is a healthy cut above a moniker of a ‘mere airport paperback,’ and has unique literary qualities that does freely mingle genres of literature, such as suspense novels, thrillers, detective novels, classic hard-boilers, and even the zany science fiction of the late-great Philip K. Dick. Also, I sense that Dean Koontz researches his subjects carefully, such as all the numerous nautical references that are used. I can fully appreciate this.

I absolutely love his characters too, even the evil ones. Jeez, that Reverend Charles Moran was one sleaze-ball! And Birdie Hopkins emerged out of nowhere, maybe from a fifties TV show, Seventy-Seven Sunset Strip. Anyway, this is my very first book of his (still soaking it in), so perhaps, I’m well on my way to becoming a Dean Koontz devotee! What shall I read next, Relentless, or should I go back to his earliest one, Star Quest?

*I first heard about Dean Koontz by listening to Judyth Piazza’s interview with the famous author. Please be sure to check it out!