“A-Team” Action Hero Breaks Out Into World of Books

In anticipation of the major worldwide launch of their Mr. T graphic novel in summer 2008, British publisher Mohawk Media has announced that they are celebrating with a special Limited Advance Edition.

With a total number of only 4,000 copies, Mr. T: Limited Advance Edition is now available. It marks the return to prominence of Mr. T, the Mohawk muscleman who was voted the fourth “Greatest American” in a recent global BBC poll, muscling in front of the likes of Thomas Jefferson, George Washington, Benjamin Franklin and Franklin D. Roosevelt. 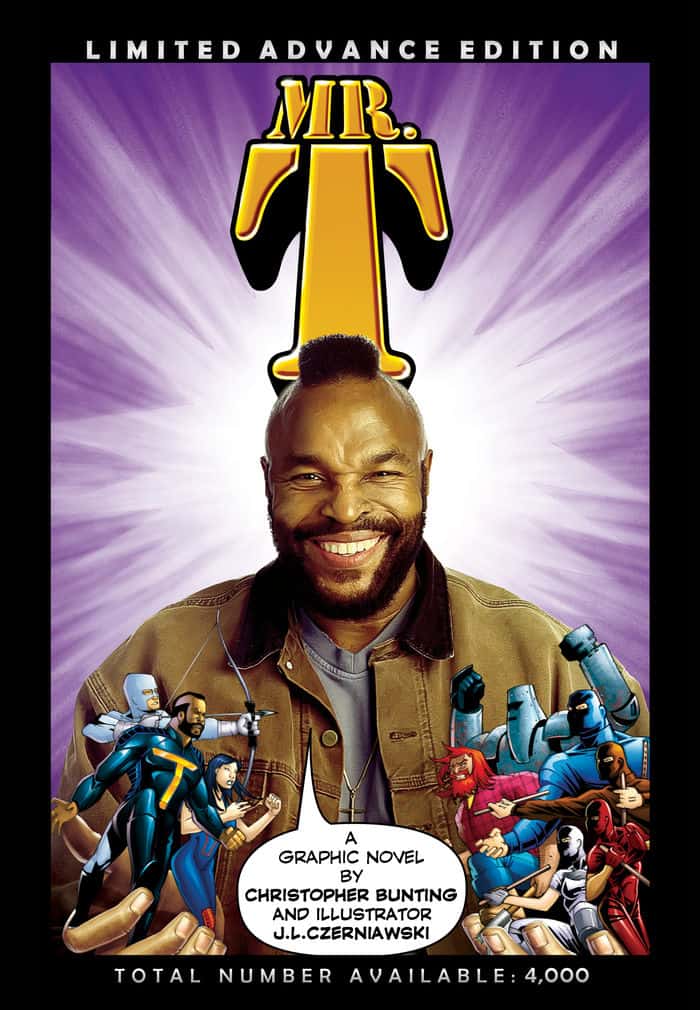 ‘It’s great to be the star of a graphic novel’, says Mr. T. ‘And great entertainment is always driven by great writing!’

Mr. T continues: ‘There’s my long-time fans, but there’s also a new generation because of “A-Team” reruns, my cartoon show reruns, and the renewed interest in “Rocky III” following the recent sequel. That’s humbling, and this graphic novel is my method of reaching them all. I’m so proud of all my life’s work, but to see myself in this book feels extra special.’

Bunting continues: ‘I’m often drawn to writing “mystery” dramas, where threads weave a much larger tapestry, with the core being the human journey, in the vein of “Lost” or “Heroes.” Therefore my attention had increasingly turned to novels and scriptwriting, and away from the shrinking comic industry. This graphic novel has been the perfect vehicle. I could approach it as a novel, yet also incorporate the finest elements from comics and television.

‘And besides, when Mr. T calls you personally, wanting you to do it, you don’t dare say no!’

Editor Stuart Buckley adds: ‘This book’s star is already a household name known and loved the world over, making this possibly the world’s highest-profile graphic novel. It’s a call for celebration, hence this Limited Advance Edition.’

Buckley continues: ‘Most so-called “graphic novels” are reprints of comics, the equivalent of cobbling together a bunch of episodes of a TV show and calling it a “movie”; or works that, in their desire to be highbrow, determinedly distance themselves from their comic forefather.

‘Neither makes full use of the inherent potential in graphic novel storytelling. This book an all-original like Mr. T himself does.’

Mr. T, who contributes world-exclusive interviews to the graphic novel and acts as its Executive Editor, adds: ‘I’ve always strived to be a good role model to children and adults alike. I can’t think of a better way to do that than by encouraging people to read! What would I say to anyone who doesn’t read my graphic novel? “I pity the fool!” ‘

Mr. T: Limited Advance Edition can be ordered direct from publisher Mohawk Media at www.mohawkmedia.co.uk for the exclusive price of Pounds 15.99 / $39.00 including delivery. Alternatively, from April 2008, it will be available through bookstores worldwide, including online, by quoting its 13-digit ISBN: 9780955680403.