A book about al-Jazeera demolishes the myths, the misconceptions and the lies. Finally Al-Jazeera has been given a fair hearing by Hugh Miles’ book Al-Jazeera (How Arab TV News challenged the World).

Western Journalists and analysts suspected all along some kind of relationship between Al-Jazeera and the former Iraqi Regime of Saddam.

Operation Desert Fox was the landmark for Al-Jazeera, since until then not many people in the West had heard of the channel.

Bin Laden made his debut on Al-Jazeera in December 1998. In June 1999 Al-Jazeera announced that it had recorded an exclusive interview with him. To many people in the Islamic World, Bin Laden was a hero. To the West, Al-Jazeera was his mouthpiece. 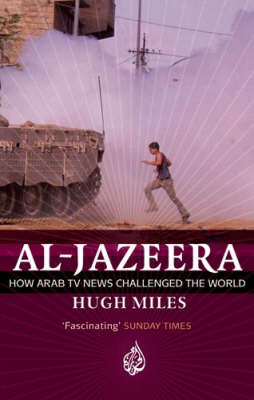 Al-Jazeera insists that there are no redlines. Its daring reports and controversial debates had angered many Arabic regimes.

Myth No 1: That Al-Jazeera does not criticise Qatar

Al-Jazeera had featured Qatari dissidents who accused the government of torture.

In November 1997 the Station criticized Israeli participation in an Economic Summit Conference held in Doha which was an implicit criticism of Qatari government policy. (For more details see page 61)

On page 357 you can read that in one episode of Ittijah Mua’akis (opposite direction) presented by Dr. Feisal Al-qassim, the discussion focused on the American airbase at Al-Udeid, a very sensitive issue for the people of Qatar. Guests and callers often abuse the government of Qatar live and uncensored on al-Jazeera. One episode of “Without Borders” featured a Saudi Journalist who attacked Al-Jazeera and described it as a puppet of the Qatari Government. Criticism of Qatar happens frequently.

Myth No. 2 Al-Jazeera is an Israeli Agent:

The Second Intifida: Al-Jazeera’s extensive coverage annoyed the Israelis. The hegemony of Israel over the world media had come to an end. Al-Jazeera’s reporting had also angered Yasser Arafat’s Palestinian Authority which shut down Al-Jazeera’s offices temporarily, thus scoring own goal. The book rightly described the PA’s action as “Stupid.”

Al-Jazeera’s coverage of the Intifida galvanized the Arab World behind the Palestinian struggle. Equally Al-Jazeera was accused of undermining Arab unity. If the station was a tool in the hands of the Mossad, why then did Ariel Sharon describe it as a propaganda tool for Arab terror?

Myth No.3 Al-Jazeera is a CIA Tool

In Feb 2000, The Taliban Regime invited CNN and Al-Jazeera to open a bureau in Afghanistan. CNN declined, Al-Jazeera accepted. This brave decision was to prove far reaching and rewarding despite the many problems it created for the Channel.

On 10 Oct the White House announced that it had asked the major US TV Networks to censor Al-Qaeda footage.

The Americans were not pleased with Al-Jazeera. Colin Powell had had a quiet word with the Emir of Qatar Sh Hamad bin Khalifa Al Thani during a visit to Washington. Within less than a month senior American politicians were giving interviews to Al-Jazeera.

Page 124: it was ironic that the Taliban tolerated Al-Jazeera but the US would not.

One American newspaper, The New York Daily News suggested that the US Military shut down Al-Jazeera (P151).

The Kabul Offices of Al-Jazeera were bombed and destroyed and despite this wilful action, the war in Afghanistan cemented Al-Jazeera’s reputation as a world-class news network.

The constant accusations and attacks on al-Jazeera by the US have demolished the myth that Al-Jazeera was acting on behalf of the CIA.

Myth No. 4: Pro-American and Pro-Insurgent at the same time

More confusing (page 202) Al-Jazeera was making enemies in the Arab World for its supposed Zionizm. Americans and Israeli were criticizing it for being a platform for terror.

Al-Jazeera struck deals with the BBC, ITN and CNN. All the major Western channels had used Al-Jazeera’s feed from Baghdad, Basra and Mosul. If Al-Jazeera was that bad, would major international organizations strike deals with it?

Al-Jazeera was the first Arab media to invite Israelis to give their views on events in the Middle East. Their guiding principles of “diversity of viewpoints and real-time news coverage” was not merely a slogan but was implemented with relish.

The Invasion of Iraq

All the mainstream USA media failed to interrogate politicians thoroughly in the months leading up to the war. The American media warmly endorsed Colin Powell’s assertions on 5th Feb 03 that Iraq had ties to Al-Qaeda and that he had evidence of labs and WMD programmes. Both proved false.

The US Administration was not happy about Al-Jazeera’s coverage of the war. Al-Jazeera began to experience difficulties operating in the US. In Iraq the US military targeted Al-Jazeera personnel shooting cameramen and reporters such as Tariq Ayoub. Both US and Mideast officials accused Al-Jazeera of being a propaganda tool.

Obstacles and Difficulties in Iraq

Messages Al-Jazeera received from Saddam and other nebulous groups were beginning to make the network look rather suspicious. (Page 298).

Al-Jazeera was penalised and harassed for reporting the same news that other networks reported unpunished. Salah Hassan an Al-Jazeera cameraman was tortured in Abu Ghraib (page 326). On May 21st 2004 Rashid Hamid Wali an al-Jazeera journalist was shot dead.

Al-Arabiya which was welcomed by Colin Powell before the war as the reasonable voice of the Arab media infuriated the US Administration when it aired footage of masked men threatening to kill members of the Iraqi Governing Council. Donald Rumsfield claimed that both Al-Arabiya and Al-Jazeera had links to the Iraqi resistance and that both had advance knowledge of attacks on coalition troops. He failed to provide any evidence (page 325).

“The Arab political and security status quo have realized that banning us does not do the trick” said Jihad Ballout Al-Jazeera Press Spokesman. (Page 343).

Politically Al-Jazeera made the Arab leaders more accountable for the way they behave. (Page 344).

“Not one Arab Satellite Channel including Al-Jazeera could survive without political and financial support from a govt or a wealthy member of the Arab elite.”

Al-Jazeera remains a model of Professionalism and Objectivity all you have to do is to watch other stations like the old established stations operating from London or the relatively new Alhurra to realize how good Al-Jazeera is. (Al-Hurra is just another ill-conceived Washington media stunt leading nowhere) read more on page 388.

The book was published before the launch of the English Language Channel. Rami Khouri, a respected Lebanese commentator said to Hugh Miles “I don’t see Al-Jazeera being a hit in English.” Molly McKew of the AEI American Enterprise Institute said: “I think it will be a flash in the pan.”

Both were proved wrong.

The book runs into 452 pages and is a highly recommended read for the general reader as well as any one interested in the media.