When compared to most of its competitors, the popular mobile instant messaging application Kik has taken a different route.

Rather than turning to acquisition, this Canadian company has embraced independence, while applications like WhatsApp and Viber have been adopted by the highest bidder.

The route that Kik has taken seems to be paying off because it’s drawing publishers like the Washington Post and brands like Burger King to its platform, which has advertising opportunities that are very interactive.

Kik launched its native video feature in March, which solved one of the most common complaint from users. Today, Kik is taking this feature to a whole different level though

The latest update allows users to send video content previously recorded as well. Since the introduction of this native video feature in March, there’s now 7 million Kik users who have shared over 110 million videos combined; therefore, it’s safe to state that this feature could become way more popular now

Users send video pretty much the way they send a photo. They simply access a video in the gallery’s camera roll while in chat and hit send. That’s it. Simple 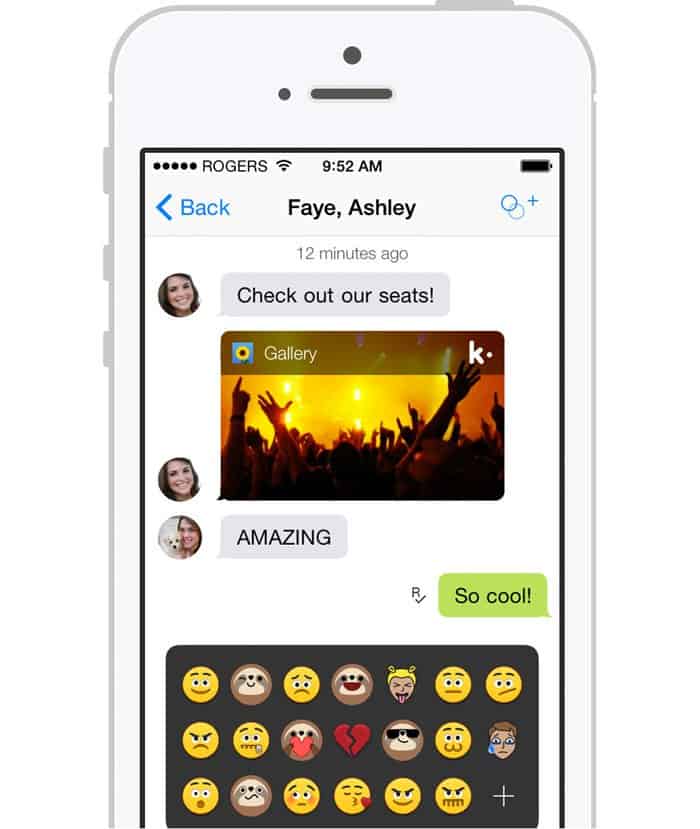 Kik went the extra mile to make web-based content easier to share in April. They conducted meaningful UX/UI upgrades that help in making content more shareable. This is the first meaningful enhancement to the popular messaging application, since targeting for Promoted Chats was integrated months ago

For starters, from within the messaging application itself, any website has now become shareable. In order to share with friends, users tap the new web icon on the chat home screen, utilize the search function to find a website or enter the URL. This is an important feature for users on the go, but even Kik for PC users will find it helpful

Since last August, Kik users have the ability to communicate and follow brands via Promoted Chats. And since November, it enhanced this service by enabling brands to customize automated responses based on keywords in messages from fans

Kik has recently reported that the effort has been very successful. More than 60 brands reportedly use the service, such as Vans, Skullcandy, Seventeen Magazine and Funny or Die. MarketingLand says that more than ten million users have had a conversation with a brand and there have been over 250 million messages exchange between brands and users. Since September, Kik users have sent almost 2 million messages to Seventeen Magazine

And Kik is now integrating basic demographic targeting for its clients and providing an improved analytics dashboard which includes actions, clicks and views

Earlier this year, this Canadian company commissioned for a study to take place on messaging application engagement among Americans aged between fourteen and twenty-five years of age. This study shows that 90 percent of users have interacted with it. Among Kik users, direct brand interaction was the highest, with 30 percent reporting an interest in engaging with brands, compared to merely 23 percent for Snapchat and Facebook