More than a thousand pages of documentation, covering UFO sightings between 1987 and 1993, were made public for the first time on Saturday, revealing information that can only be considered as stunning.

Whilst the documents do not provide absolute proof of the existence of aliens, at least one of the reports offers sufficient mystery to suggest that we are not alone.

On August 4, 1990 near the A9, at Calvine, north of Pitlochry, a diamond shaped UFO was seen hovering in daylight. According to two witnesses, the UFO hovered for about 10 minutes, during which time military aircraft were also seen making a series of low-level passes. The craft later flew up into the sky at a great speed. 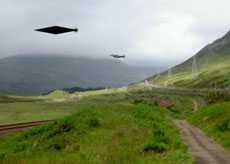 The witnesses took a number of photographs and at least six of these were given to the Daily Record newspaper, who in turn presented these to the Ministry of Defence. A report was prepared for the then Under Secretary of State (Sir Archie Hamilton) on September 14, 1990, informing him that the Scottish Daily Record might run a story on the UFO sighting.

The photographs, which were not published, showed a jet aircraft flying nearby. Further investigation revealed that this was a Harrier and that a second jet (possibly another Harrier) may also be visible in one of the photographs.

The MoD (Ministry of Defence) had no idea where the Harriers had come from and the sighting remains a mystery.

Similar shaped craft have been considered as US Air Force Stealth fighters, but none have been reported “hovering” before. And even if it was, what was it doing there and why did the Harriers appear to investigate the craft (wouldn’t they have been informed of such an operation beforehand?)

The sighting was certainly taken seriously by the authorities at the time, but as we have seen so many times before, the information was withheld, until now!

But why release this information now, after keeping it secret for almost 19 years?

It seems hard to believe that the increase in sightings recently, together with a more relaxed stance by the UK and US on revealing previously secret UFO information, not to mention the Vatican’s changed views on alien life, is all a coincidence. What is going on?

Are we (the public) being prepared for alien contact in the very near future, or is this, as some people believe, the first step in a “fake” alien visit, designed to trick the public into accepting new conditions and control?

The release of the declassified files confirm that the authorities chose to keep important information from us (for a very long time) and it is only natural that many people will question their motives for allowing us to see this now. I don’t know about others, but I’m always suspicious of governments who “volunteer” certain information, yet refuse to release details in other areas (like the JFK assassination or 9/11).