The MOD has released further documents on UFO sightings, covering the years 1981 – 1996 (around 800 sightings).

As usual, most of the reports concern objects that were “something else” and the response from the general public will no doubt support the official line, adding their standard “UFO humour” to comments that will appear in forums all over the country (and world).

News presenters will be fighting that irresistible urge to “smirk” when mentioning some of the reports listed in the declassified files (picking the ones that are likely to obtain the biggest laughs), and of course including the compulsory “UFO jokes” about little green men that we have all heard a million times before!

If the media were to spend as much time investigating some of the more serious sightings, as they do trying to discredit them, we might actually make some progress on this subject. Unfortunately, the mainstream media are more interested in writing articles that “titillate” their readers, or stories that support their master’s hidden agenda (mainly politics). 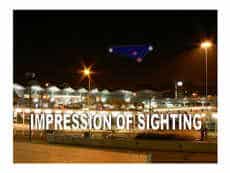 Whilst most ufologists are keen to see the UFO subject attract mainstream media interest, this excitement is always ruined by the childish reporting that goes with it. The Sun (surprise, surprise) selected one of the declassified reports that involved the sighting of an “alien” that had a head shaped like a lemon. The story included an image of a “mock alien” with a lemon head, but did not mention the more interesting parts of the report.

But what else should we expect from a Newspaper that publishes an article about the “Hefty” Samoan 100 metre sprinter who has a “fat chance of winning,” and uses a story title of “Usain bulk”

It goes without saying that some of the UFO sightings have a more earthly explanation, and maybe some of those who witness them are not the most reliable people in the world. However, this cannot be said for everyone.

On the 16th of June 1996 (12.10-12.20 am), a police officer (and colleague) with the West Midlands Police reported seeing a UFO over Birmingham Airport. It was a triangle shape with 2 red lights and 2 white lights. The object was approximately 200-300 feet off the ground. After making a couple of turns it flew off in the direction of Birmingham City Centre. The UFO moved fairly slowly and without any noise.

According to Air Traffic Control, there was no aircraft movement at the time and they strongly advised him to report this to the MOD.

There have been many UFO sightings of craft shaped like a triangle and some believe that there may be a connection to a secret US spy plane called Aurora, alleged to be capable of hypersonic flight (but reportedly able to move slowly and hover as well)

Hopefully, one day serious investigation will take place on some of the UFO sightings that are made. But in the meantime we will have to get used to these reports being sat on for years, and then made fun of when the information is finally released to the public.

If you wish to report a sighting in Birmingham UK (and have it taken seriously), you can submit the details to the Birmingham Guide, or send it to me personally.