I suppose with so many leading figures going in and out of Downing Street lately, with secret documents on display to the public, we shouldn’t be surprised that the future boss of MI6 had his personal details published on Facebook.

The Mail on Sunday revealed that Lady Sawers, the wife of the future head of MI6 Sir John Sawers, added personal information about her husband and family on the social networking site Facebook, including the location of their flat and details about the couple’s friendships with senior diplomats and actors. The details were later removed after the paper contacted the Foreign Office.

Foreign Secretary David Miliband tried to make light of the blunder by saying “You know he wears a Speedo swimsuit. That’s not a state secret.” 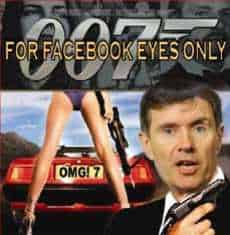 Lady Sawers had not imposed privacy protection on her account, allowing any of Facebook’s 200 million users in the open-access “London” network to see the entries.

Apart from the obvious embarrassment to Sir John and his new role as head of the overseas Secret Intelligence Service in November, his wife has potentially put their whole family in danger by revealing this information.

Hopefully, Sir John will have time to find a new location before he takes up his new position and will consider placing some security measures on his wife’s computer; otherwise we may see him appearing on YouTube next!